The Geological Survey of Queensland has announced five projects selected from the second round of submissions to the Queensland Government’s Government’s Future Resources Program Industry Priorities Initiative that will be implemented by the survey in coming months.  The projects were selected on the basis of having the greatest perceived potential to have significant positive impacts on exploration investment in the state.

The selected projects are:

A call for Round 3 proposals, the last currently planned under this initiative, is planned for early 2015.

A two day seminar presented by AIG and Geoscientists’ Symposia

The Yilgarn Craton (WA) in the second half of the 20th century witnessed a transformative period in the resources industry which included the discovery and successful exploitation of a new deposit type (komatiite-hosted nickel sulphide), a massive boom in exploration and mining of Archaean lode gold, and developments in a number of other commodities.

This two day symposium will look at the who, why and how of this momentous era 1950 to 1999. The meeting will be a deliberate acknowledgement and record of the achievements of teams and individuals, some of whom are no longer with us.

The symposium first circular and call for papers  is available here: Yilgarn Retrospective 2015

Professor Stewart, who is Professor of Geoscience Communication at Plymouth University in the UK, presented a talk on the topic of 50 Shades of Grey: communicating rocks.

Dubbed geology’s “rock star” by The Guardian newspaper, Professor Stewart is well known for his intrepid adventures on TV while explaining the science of earthquakes, volcanoes, tsunamis and the volatile history of our planet.

Professor Stewart has presented many programs for the BBC, including the award-winning Earth: The Power of the Planet, a five-part series about the forces that shaped Earth.

His four-part BBC series, Rise of the Continents, aired on ABC TV in 2013, and featured an episode on Australia. Other notable programs he has presented include Earth: The Climate Wars, How Earth Made Us, How to Grow a Planet, and Volcano Live.

The UNSW Medal for Science Communication was established in 2014 by the Dean of UNSW Science, Professor Merlin Crossley, to recognise excellence in the public communication of science.

The annual award honours individuals who have shared their knowledge and scientific insights with a broad audience – informing, inspiring and engaging the public on scientific topics and issues. The recipient will give the annual Scientia Lecture.

2014 Scientia Lecture: 50 Shades of Grey: communicating rocks. The 21st century is like a golden age for geology. Rocks not only provide a fascinating window into the distant past; we live at a time when we have the technology to see geological processes that could affect our future occurring in front of our eyes. Drawing on experiences from more than a decade of documentary-making for the BBC, this talk explores how it is possible to communicate these exciting aspects of geology through better storytelling, so there can be meaningful public engagement on geological issues that affect society.

A collaboration between these two education institutions, the initiative is aimed at creating resources industry career awareness amongst primary school students. Ultimately, the Mining Challenge provides recognition for a mining based educational pathway for the primary school students to pursue as they transition firstly into secondary education at Kent Street and then progress on to Curtin for undergraduate studies at the Western Australian School of Mines.

Both Kent Street and Curtin are renowned for their resources education throughout Western Australia.  Each year, up to half of Kent Street’s Earth and Environmental Science class progress to Curtin to pursue either geoscience, mining engineering or metallurgy degrees.

The event theme was “You need to find it to mine it”.   The challenge involves 180 primary school students from six local primary schools who are mentored, led and managed by Year 9 Kent Street students to compete in a series of mining activities.  It is a huge day for both the students and the judges.  The winning school receives $1000  of scientific based Lego and both female and male miners and mine managers are also rewarded.  The AIG judges are responsible for awarding points related to team work, construction and environmental awareness. 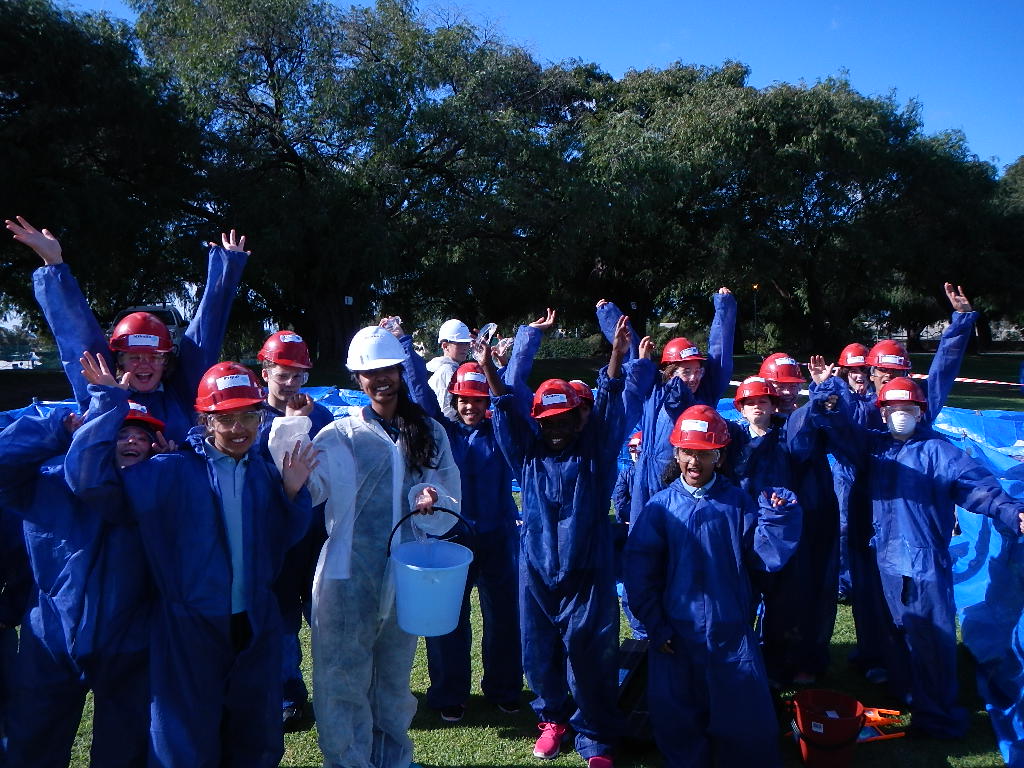 Four AIG WA committee members and two other AIG members, geologists Peter Pring and Michael Outhwaite, were involved in the coordination and judging of the event.  Myself, a teacher and geologist from Kent Street, worked with the Curtin contingent of which Sam, a 3rd year Applied Geology student from Curtin University, was one to organise the day.  Heather and Mike, who are also AIG Councillors, both volunteered their time to judge. 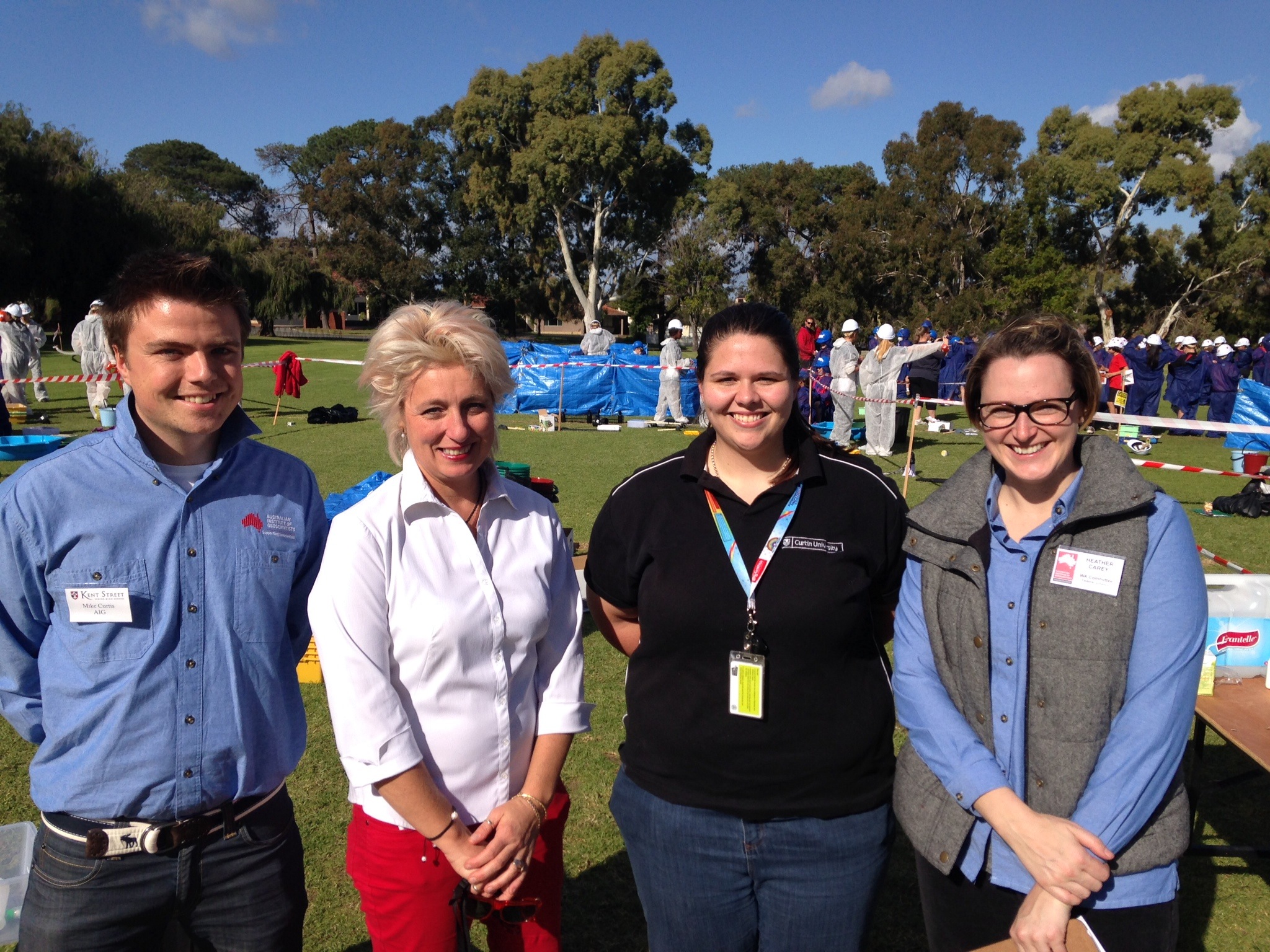 Resources Outreach to school students is an important activity for AIG’s WA Branch.   Historically, AIG WA’s support of Kent Street Geoscience has positively resulted in the generation of young resources graduates and this Mining Challenge further cements our commitment to education.  A much needed sustainable approach, this strategy ensures that our industry can draw on home-skilled talent beyond 2020.

There are, potentially, a few subtle messages in the latest employment survey data.

The proportion of respondents describing themselves as self-employed fell 10%, from 14% to 4% between January and June this year. For the first time since the surveys commenced, no respondents described themselves as working part time.  This appears to support the result of more than 40% of self-employed geoscientists securing less than 10% of their desired workload.

30% of unemployed and underemployed respondents reported that they are looking for alternate employment outside the geoscience professions, up from about 25% in January.

These sorts of haven’t been seen in the employment surveys before and suggest that self-employed geoscientists, contractors and consultants, have been profoundly affected by the current downturn.

Are you a contractor or consultant with a story you can share?  Post a comment here or on the AIG Linkedin Group, or send an email. 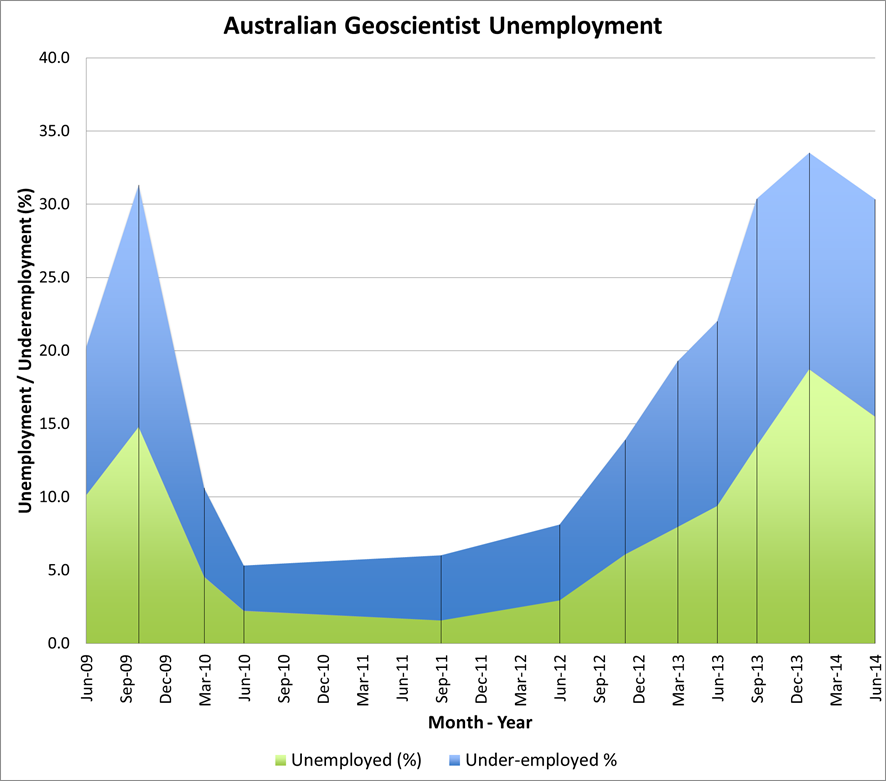 Some 88% of underemployed geoscientists reported that they were securing less than half of their desired level of self-employment. More than 41% of underemployed geoscientists were securing less than 10% of their desired level of self-employment. This was the first survey in the series to collect this information.

More than 60% of unemployed and underemployed geoscientists reported having been so for six months or more.  Almost 20% lost their employment in the past three months.  Some 60 % of unemployed and underemployed geoscientists were not confident of returning to full employment in the next 12 months.  Less than 5% were confident of returning to work in the next three months.

Almost three percent of unemployed and underemployed geoscientists were seeking permanent work outside their profession.

Too few responses were received from the Northern Territory and Tasmania to provide meaningful figures for those jurisdictions.

The June 2014 survey attracted an excellent response. In all, 1,069 geoscientists completed the survey – more than one in eight geoscientists in Australia according to the most recent Australian Census figures.

AIG President Mr Wayne Spilsbury cautiously welcomed the latest survey results. “We hope that the improvement in unemployment evident between January and June this year is the beginning of a trend, but the small size of the improvement recorded and the increase in underemployment amongst self-employed geoscientists is not welcome news”.

“AIG hopes that we will see the effects of Federal Government initiatives, especially the Exploration Development Incentive, to promote investment in Australia’s exploration sector in the form of improved employment opportunities for geoscientists”. “State Governments also need to promote exploration by eliminating red-tape that contributes to investment in exploration being diverted from activities that could contribute to the discovery of new mineral resources”.

Mr Spilsbury expressed his thanks to Australian geoscientists who have contributed to the ongoing success of these surveys since their inception in June 2009. “Without the support of AIG members and their colleagues, AIG would not have the reliable data generated by these surveys to track this important aspect of their profession in Australia”.