The Member Organizations of the International Union of Geological Science’s new Task Group on Global Geoscience Professionalism (TG-GGP) are pleased to report on its recent progress and to announce the launch of its website at www.tg-ggp.org, as a service to geoscientists and the geoscience profession. The TG-GGP will continue to expand this website to add to its value to the profession, globally.

AIG is a member of the task group’s executive committee.

Geoscientists are relied upon to directly serve the public by providing expert services and opinions on which others rely for key decision-making. As a consequence geoscience is a now a recognized profession as well as the scientific discipline it has always been.

Formed by the IUGS at the 34th International Geological Congress in Brisbane, Australia, in August 2012, the Task Group on Global Geoscience Professionalism (“TG-GGP”) recognises this transformation and provides a single global forum for interchange on professional affairs in geoscience worldwide.

The Task Group has been set up by a group of national and international professional geoscience organisations from around the world, representatives of which have formed an executive committee.  Further information regarding the task group is available here.

About 60% of all drinking water in Europe comes from groundwater. Considering the vital importance of ensuring the quality and the sustainable exploration of the European groundwater bodies, the European Federation of Geologists organised on 22 and 23 November 2013 a Hydrogeology workshop with the theme ‘European water policy: challenges for hydrogeologists’.

The workshop was attended by nearly 80 participants from 18 different countries including several representatives of the European Commission. This fact demonstrates the increasing interest of experts and policy makers in groundwater issues, in phase with the launch of the new EU Framework Programme for Research and Innovation, Horizon 2020.

The public was composed of professionals active in all aspects of groundwater reaching from research to water management. The presence of professionals from different professional activity and countries provided thus an excellent basis for stimulating debates and experience exchanges setting the ground for future collaborations.

The aim of the workshop was to highlight those areas where hydrogeologists are playing an important role in the implementation of the European water policy. The first section provided an introduction to current water policy, including presentations from all relevant EU water policy areas. EFG thanks the support received by the European Commission and their broad representation by the participation as speakers and chairmen from DG Enterprise and Industry, DG Environment, DG Research and Innovation and of the European Environment Agency. This first section was followed by four technical sections on Land use and ecological status; Chemical status and pollution; Water efficiency and Vulnerability, with presentations from experts from EFG’s Panel on Hydrogeology and from the supporting organisations.

The workshop ended with a Final Declaration prepared by the EFG Panel of Experts on Hydrogeology. Stressing the importance of bringing groundwater to light in our everyday lives through education and training at all societal levels from secondary school education to continuing professional training, the European Federation of Geologists hopes that in the future groundwater issues will attract more attention within Horizon 2020 calls for proposals and other policy areas such as environment and development.

About EFG: The European Federation of Geologists (EFG) is a non-governmental organisation that was established in 1981 and today includes 21 national association members. It is the representative body for the geological profession in Europe.

EFG contributes to protection of the environment, public safety and responsible exploitation of natural resources by promoting excellence in the application of geoscience, by supporting research and teaching that underpins it, and also by creating public awareness of the importance of geoscience to society.

About the EFG Panel of Experts on Hydrogeology: Hydrogeology is a main topic among technical and professional skills of the geologists, and it is probably the most strictly related to the environmental protection and preservation. In the 21st century, the pursuit of the equilibrium between human needs and environmental sustainability involves as a main element the water resources, representing at the same time a resource and a risk. It is a task of modern geologists to contribute to the management and protection of water resources, with particular attention to groundwater. The mission of EFG’s PE on Hydrogeology is to contribute to the development of knowledge, to the introduction of policies and to the technical improvement of professional geologists in this field.

Darwin’s Treasure Chest is the premier project of the newly established Science Visualization Initiative, a not-for-profit organization that seeks to establish collaborative efforts between scientists, technicians, artists, and media experts to improve science literacy through better science communication.  The mission of SVI is to increase science literacy by providing educators, researchers, and creative professionals with training, seed money, and access to strategic planning skills and creative resources that help them develop learning tools. We focus on supporting projects that use new media and new technologies to communicate.

The Darwin’s Treasure Chest project is led by Chris Sloan who was chief art director and senior editor for paleontology at National Geographic Magazine for many years. The project will include the collaboration of many researchers, but our principal advisor is Dr. Kevin Padian, a well-known evolutionary biologist at UC Berkeley.  Ricky Lim, a highly experienced artist, model maker, and animator, rounds out the core project team.

The Darwin’s Treasure Chest project aims to create digital models of prehistoric creatures that teachers, parents, and students can download from the internet for 3D printing, along with educational content. These tools are particularly geared to K-12 education and to provide teachers with fun new ways to teach about evolution, Earth’s history,  and climate science—that are fundamental for improving science literacy. 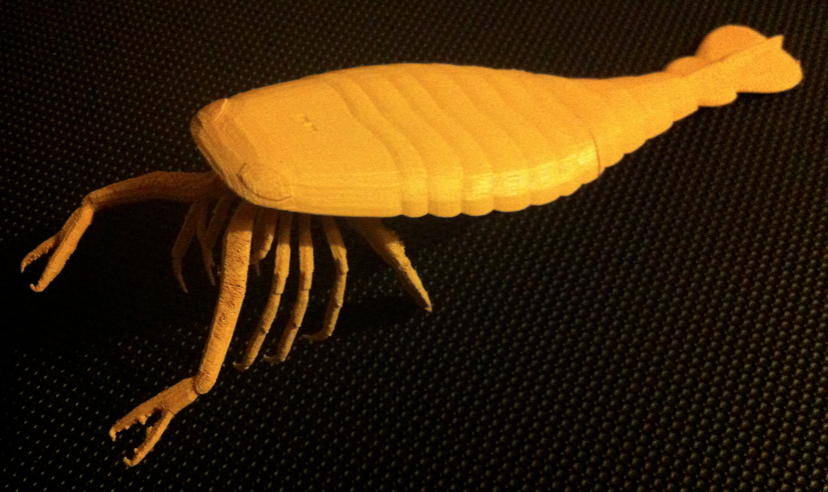 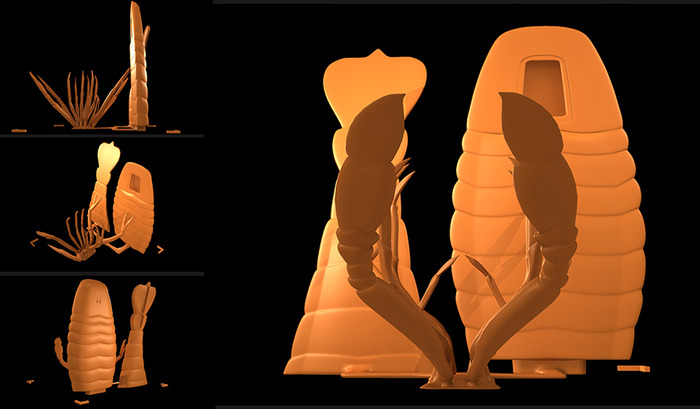 Models are being designed to be printed in segments and assembled 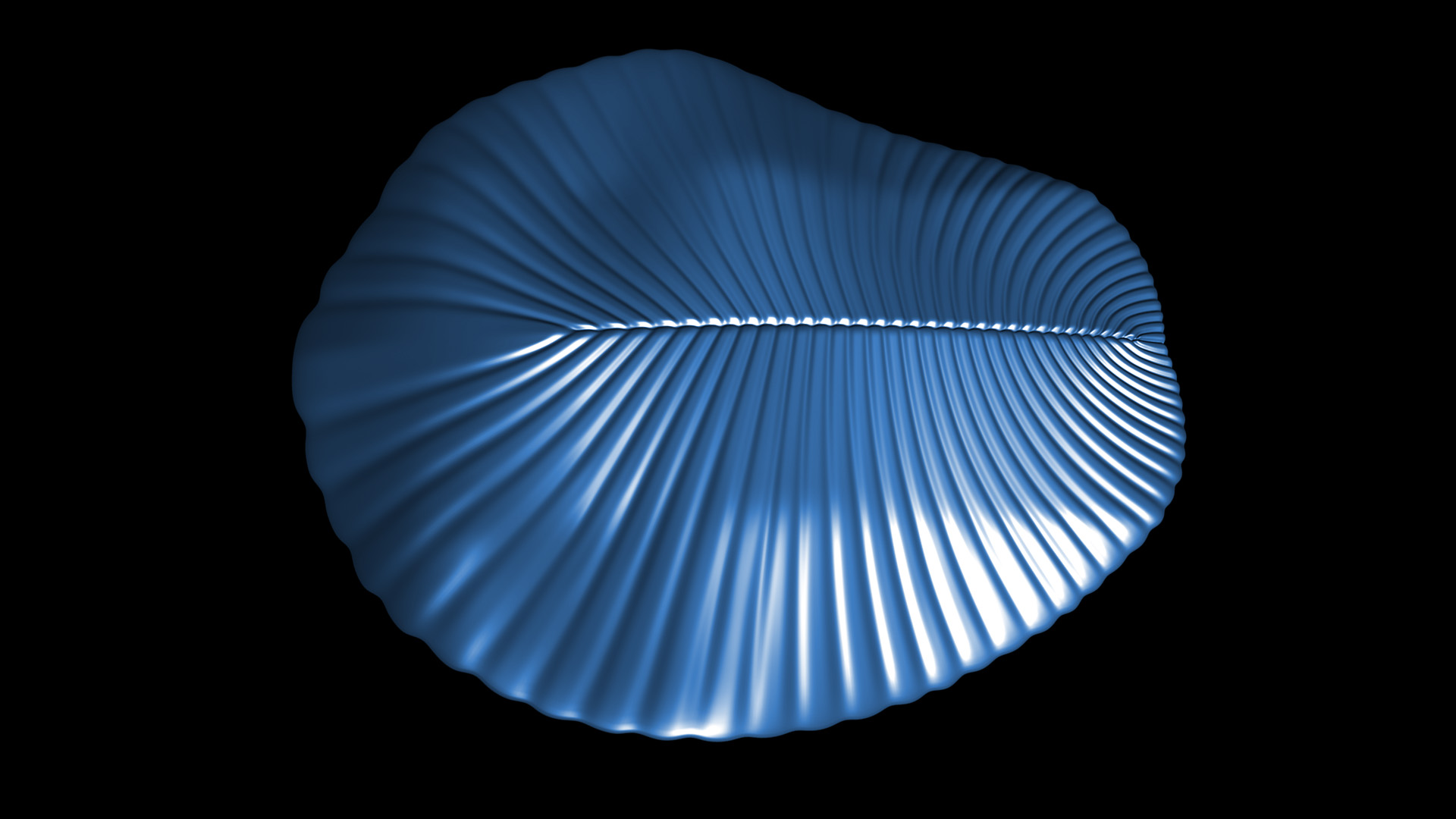 A 3D model of Dickinsonia – a 650Ma fossil from Australia

The first fundraising effort of SVI is the Darwin’s Treasure Chest Kickstarter campaign. This will help off-set the costs of creating the models.  Because of the “high-tech” nature of the project, it will also help students learn skills that will be useful in the technology-driven job market of the future through hands-on project experience. This type of project is also well-suited to kinesthetic learners—students who learn better by doing and making things—as well as people who are visually impaired.

Geoscientist underemployment and unemployment in Australia has slumped to a level matching that experienced at the peak of the global economic downturn in 2009 according to the latest Australian Institute of Geoscientists employment survey.

The downturn in Australia’s exploration and mining industry continued during the third quarter (July-September) of 2013 with the combined under- and unemployment rate reaching 30.4%.  Some 13.5% of professional geoscientists in Australia are currently unemployed.  An additional 16.9% are unable to achieve their desired level of employment by being asked to work reduced hours or self-employed being unable to secure their desired level of engagement by clients. 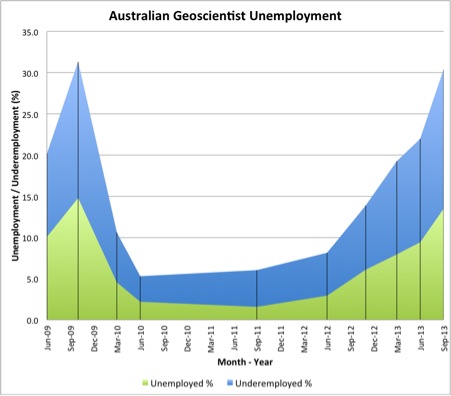 The latest snapshot in an ongoing series of surveys monitoring employment conditions for Australia’s professional geoscientists was taken at the end of September this year. Approximately one in ten of Australian geoscientists completed the survey questionnaire.

Most states recorded an increase in both under- and unemployment. Queensland geoscientists fared worst, with the unemployment rate more than doubling from 7.6% to 16.2% in the three months between June and September this year.

An increase in unemployment of 6.1%, from 9.1% to 15.2% was observed in Western Australia, and a similar increase from 7.4% to 12.5% was observed in South Australia.  Unemployment fell in New South Wales and Victoria, but the falls were offset by steep increases in the underemployment rate.  State figures are not presented for Tasmania and the Northern Territory due to the small number of respondents completing the survey.

“One of the most disconcerting features of the latest survey results is that the decline in geoscientist employment in Australia is continuing to accelerate” said AIG President, Kaylene Camuti.  “The lack of confidence amongst under- and unemployed geoscientists in being able to regain employment in their profession is also very disheartening”.  “The loss of skills this creates in Australia will have long term consequences for our country that relies on its resource industries and needs geoscientific skills in a wide range of other fields including agriculture, infrastructure development and environmental management and remediation”.

AIG is continuing to increase its efforts to support members by bringing their situation to the attention of policy makers, who could make a difference, particularly by introducing economically sustainable measures to reduce cyclicity evident in exploration investment amongst other measures, and providing its members with opportunities to help maintain or further develop their skills, to help ensure they can access future employment prospects as the jobs market improves.  These measures include access to high quality seminars presented by both leading Australian and internationally recognised geoscientists, extensive self paced on-line training, and a rigorous professional registration scheme by which members can have their own continued professional development initiatives independently verified.

AIG commenced this survey series in August 2009 and has conducted comparable surveys at semi-regular intervals during that time (indicated by the lines on the graph above). Further surveys will be conducted throughout 2014.  All Australian geoscientists are encouraged to participate and, in doing so, help to ensure that results are as representative and reliable as possible.