With exploration increasingly taking place ion areas with poor outcrop or under significant cover, the need for explorationists to obtain geological information from geophysical data has never been greater.

Intended for geoscientists working in the minerals industry, this 1 day symposium brings together industry and academic geoscientists who are world-leaders in the fields of practical geophysical data interpretation and integration of geoscientific datasets for mineral exploration applications.

Regional Metallogenic to Local Controls on Circum-Pacific Gold and Copper Deposits is a short course to be presented prior to PACRIM 2015 (Workshop W2).  This one-day workshop will be held at the Conrad Hotel in Hong Kong, China on the 17th of March, 2015.  The course will be of particular interest to geoscientists seeking to broaden their understanding of ore-forming processes and who wish to explore for gold and copper deposits in the circum-Pacific region.

The workshop will consist of two parts. The first, presented by Steve Garwin, is titled Tectonic and Structural Controls to Gold and Copper Mineralization in the Circum-Pacific Region. This presentation will consist of three main topics:

The second part of the course, presented by Craig Hart, is titled Intrusion-related Gold Metallogeny. This presentation will consist of three main topics:

Steve has 25 years of experience as an exploration geologist in SE Asia, China, Papua New Guinea, Solomon Islands, Australia, the western USA, British Columbia, Mexico, Peru, Ecuador and Chile. He worked with Newmont Mining for ten years, including two years as Chief Geologist in Nevada. Steve is one of the leading authorities on epithermal, porphyry and Carlin-style mineralization in the circum-Pacific region, particularly SE Asia. He has been an adjunct research fellow at the Centre for Exploration Targeting at the University of Western Australia since 2001.

Craig is the Director of MDRU, the Mineral Deposit, Research Unit at the University of British Columbia. His experience includes regional geological mapping, mineral deposit and regional, metallogenic studies, plutonic systems, geochronology, and exploration, targeting orogenic belts around the word. He is a major contributor, to the development of intrusion-related gold models, is dedicated to, graduate student research and training, and a recipient of the SEG Distinguished Lecturer (2011).

The early bird registration for the PACRIM 2015 Congress closes on the 31st of January.  The three day program will present over 85 technical abstracts plus an additional 7 keynote presentations from renowned international speakers.

AIG is a supporter of PACRIM 2015. AIG members are eligible for supporter’s rates.

In the first quarter of 2014 the AIG Australian Geoscientist Employment survey recorded the highest levels of unemployment and underemployment since the surveys commenced in 2008. The September quarter survey showed the first signs of improvement in employment conditions after a protracted downturn. This survey is intended to measure whether this improvement continued through to the end of 2014, setting the scene for the New Year.

With your support, The AIG Australian Geoscientist Employment Survey is now regarded as a trusted indicator of geoscientist employment specifically, and an indicator of the health of Australia’s exploration and mining sector more generally. We need your support, for a few minutes every every quarter to maintain the value of this series of surveys.

The surveys provide a snapshot of employment opportunities for Australian geoscientists based on “hard data” from a representative sample that is used in representations to government, and for use in a range of other areas by both AIG and industry representative bodies with which AIG shares the survey results.

Click here to complete the survey. The survey collects no identifiable, personal information and takes less than two or three minutes to complete. Your time spent completing the survey really helps to make a difference to the standing and knowledge of our profession.   The survey will remain open unto 31 January 2015.

The five day exploration skills course for graduate geoscientists planned for Kalgoorlie, Western Australia, 19-23 January 2015, organised by the AusIMM Geoscience Society and Digirock and supported by AIG, has been postponed until later in 2015.

The course brochure which provides course content and structure information is available here.  Watch the web site for information regarding rescheduling of this valuable course.

From January 1, 2015, all students undertaking any form of training with a nationally recognised training provider in Australia will be required to have a Unique Student Identifier (USI).  The USI program is administered by the Australian Government Department of Industry.

A USI is an account (or reference number) made up of numbers and letters. The USI will allow your students online access to their training records and results (transcript) through their online USI account.

A USI is required for both new and continuing students undertaking nationally recognised Vocational Education and Training (VET) courses to receive their statement of attainment or qualification.

A USI may be obtained online and at no cost to students.  This USI will stay with your students for life and be recorded with any nationally recognised VET course that is undertaken from the 1 January 2015.

Students can access their USI accounts online from computers, tablets or their smart phones anytime. 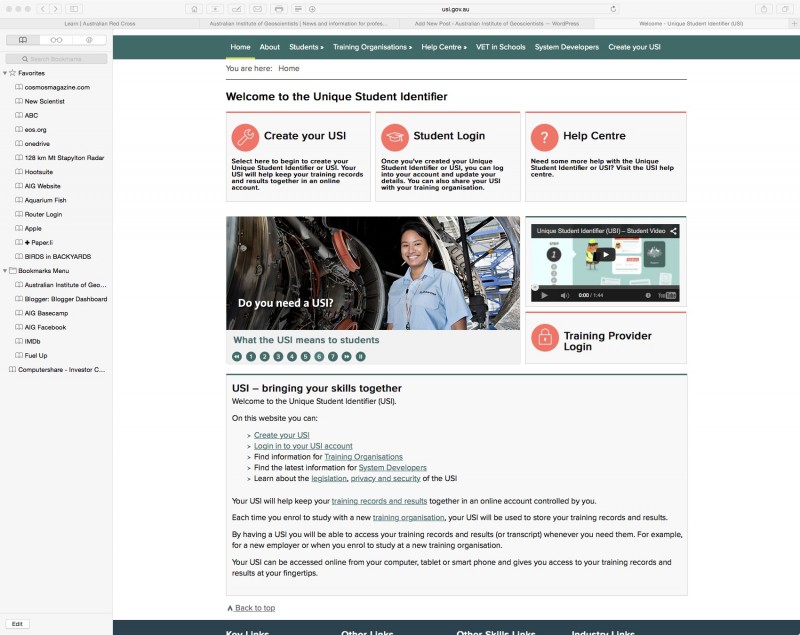