AIG Strategy and Future Direction: Have Your Say

The AIG Council meets annually, face to face, to consider the Institute’s priorities and future direction in order to maintain AIG’s role as a dynamic, responsive and relevant organisation, providing support, professional services and opportunities for members.

This years meeting will be held in Adelaide during June.

A short survey has been prepared to seek input from members on a selection of topics to help inform councillors of members’ concerns, opinions and views leading up to this meeting.

Please take a few minutes to express your thoughts and ideas. Is the Institute meeting your expectations and needs, what could be done differently and should AIG be considering new directions in its core role of “Supporting Geoscientists”?

Answering most questions in this survey is optional. Your thoughts and opinions on each of the questions raised are, however, valued and appreciated. Those questions that require an answer have an asterisk (*) next to the question number.

Your response will be used by Council to help guide the direction of the Institute to ensure it remains highly relevant and responsive to members’ interests and needs.

Information regarding the survey has only been sent to AIG members.

Could you please respond to the survey, available here, by 13th June 2015.

INTRAW is a three-year international research project on raw materials.  The project is funded by the European Union (EU) and was launched in February this year.  Australia is represented in the INTRAW project by the Australian Academy of Technological Sciences and Engineering (ATSE http://www.atse.org.au/), which is a partner in the INTRAW consortium, and by the AIG, which is a third party partner in the project.  In its role as a third party partner the AIG will assist in disseminating information so that AIG members and the wider geoscience and resources communities are aware of the project and its outcomes.

The INTRAW project aims to map best practices and develop new cooperation opportunities related to raw materials between the EU and technologically advanced countries.  The project will address:

The project is coordinated by the European Federation of Geologists (EFG) and brings together an international consortium of 15 partners with extensive experience in research, innovation, education, industry, trade and international networking across the entire raw materials value chain. The project partners will be actively supported by three Panels of Experts on “Research & Innovation”, “Education & Outreach” and “Industry & Trade”.

Through the EFG’s third parties – who represent the members of professional geosciences organisations in 18 European countries, the USA, Australia, South Africa and Canada – a broad global network of geoscientists will further enhance the project.
In the first two years of the project activities will include mapping best practices and knowledge transfer. The outcomes of these activities will be used as a baseline to set up and launch the European Union’s International Observatory for Raw Materials as a knowledge management infrastructure. The Observatory will be a permanent international body that will remain operational after the end of the project, and will aim to establish and maintain strong long?term relationships with the world’s key players in raw materials technology and scientific developments.

The AIG will keep members informed as the project develops, via reports in AIG News and the AIG web site.

The Women in Resources National Awards (WIRNA) recognise and celebrate the contributions and achievements of women in Australia’s resources sector.

Resource sector bodies throughout Australia have been promoting the value increasing the proportion of women at all levels within the resources sector and these awards form part of that aim.

These awards are another valuable tool to create nation-wide awareness of women in the sector, and encourage other women to consider it as a career path.

Find out more at www.wirna.org.au

A one day seminar and accompanying three day field conference from 5th June 2015.

The New England Orogen, the most eastern part of the Australian continent is a fertile section of New South Wales and Queensland for a variety of mineral deposits, varying from base and precious metals to building stones and industrial minerals. Significant advances in the understanding of the Orogen have been made in recent times and the seminar aims to present an up to date review of the knowledge.

Seminar speakers have been drawn from a variety of industry, government, academic and consulting organisations to provide information exchange and raise awareness of geoscientists interested in the region.

The seminar will be followed by a three day Field Conference to the southern Queensland and northern NSW parts of the New England Orogen, highlighting the metallic and industrial minerals occurrence in the area.

The one day seminar will be followed by a three-day field conference departing Brisbane at 8:00 am on Saturday, 6th June and returning at approximately 6:00 pm on Monday 8th June.  Transport will be by bus departing from the Roma Street Transit Centre, Brisbane. The field conference is restricted to 29 participants. Registrations will close 29 May or when all places have been booked.

Mineralisation styles of the northern and central New England Orogen

What sort of complaints does AIG deal with regarding members’ conduct?

The Ethics Column
What sort of complaints does AIG deal with regarding members’ conduct?

It’s worth pointing out that all complaints received by AIG are dealt with in accordance with the Institute’s complaints process, the workflow for which is explained by the diagram below that is also published on the AIG web site. 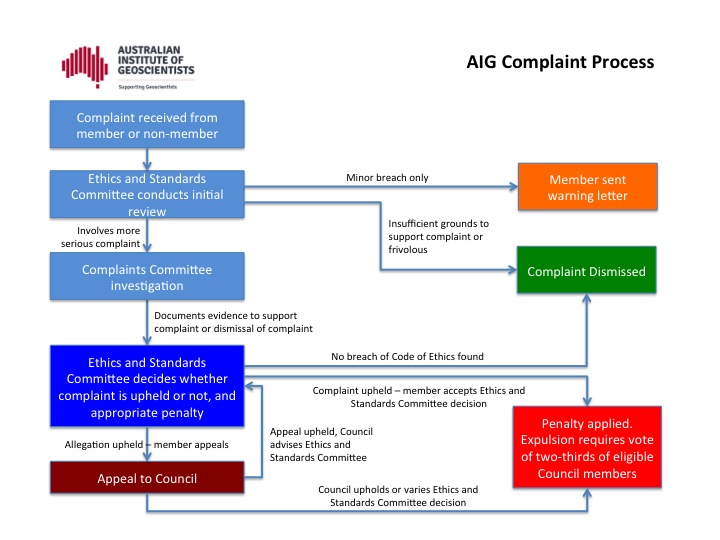 Both the Complaints and Ethics and Standards Committees attempt to deal with issues before them in a prompt manner, but the time required to complete processing of any complaint depends on the complexity and gravity of each case.

There are typically between one and three complaints under investigation by the Complaints Committee at any point in time.  Many members I’ve told this are surprised by the number of complaints received by the committee and express surprise that there is not broader knowledge of this amongst members.  This is actually a very positive sign that the committees are working effectively.  To be fair to both complainants and those members against whom a complaint has been made, the processes need to be conducted in confidence.  Where there is no case to answer, the subject of the complaint and the complainant are informed of the outcome.  Where there is an adverse finding, however, the outcomes of the investigation and rulings are published.  There hasn’t been an adverse finding warranting publication for some time, hence the low profile of the Complaints and Ethics and Standards Committees.

What sort of issues are the subjects of complaints?

Complaints cover any aspect of professional practice.  At their core, the subjects of complaints can be classified as:

Professional misconduct is elegantly described by Andrews (2014) as “any conduct detrimental to the interests of the public”, that “harms or tends to harm the standing of the profession generally” or “would reasonably be considered disgraceful, dishonourable or unprofessional”.  AIG’s Code of Ethics provides more specific guidance that supports these very general principles.

In the past, AIG has dealt with complaints regarding alleged:

Complaints associated with JORC compliance probably account for between one half and two thirds of the Complaints Committee’s work and, in recent times, have been focussed on the ability of members to act as Competent Persons as defined by JORC; i.e. meeting the commodity experience requirements.  The remaining third of complaints cover a diverse range of issues in which the treatment of members by employers feature.  These are, possibly, the most complex issues dealt with by the Complaints and Ethics and Standards committees as there are frequently situations where laws and government regulations come into consideration.  Legal advice may be needed, and is sought where required, to help resolve issues of this nature.

Who Can Make a Complaint?

Any individual or corporation can make a complaint regarding the actions of an AIG member.  All written complaints, clearly outlining the basis for considering the conduct of a member to be unsatisfactory, initiate a complaints process.

Does AIG monitor the conduct of members?

AIG expects members to comply with the Institute’s Code of Ethics at all times.  The Institute is not, generally, in a position to monitor the conduct of members and expects members to honour their obligation, set out in the Code of Ethics, to make the Institute aware of instances where the conduct of others may be in breach of the Code.  The exception to this relates to JORC and VALMIN where there is a process of random review of announcements in which members are nominated as Competent Persons.  This process at times reveals a statement by a company that is considered not to comply with either code.  The Complaints Committee, in these instances, may itself initiate a complaint against a member, or make a complaint on behalf of the Institute to another body.  There have been several instances in the past year where AIG has referred the compliance of companies with the JORC Code to the Australian Securities Exchange (ASX) for investigation that have involved alleged inappropriate use of information provided by Competent Persons, or failure to nominate a Competent Person in releases providing exploration results, mineral resource and ore reserve information.

There have also been instances where AIG has referred an alleged issue with the conduct of a Competent Person to AusIMM, where the individual is not an AIG member but believes there are grounds for the conduct of the Competent Person to be investigated.  AIG investigates all issues involving AIG members.  There are situations, most frequently associated with JORC Code compliance, where AIG members who are also AusIMM members may be investigated independently by both Institutes (and vice-versa).

Two obligations apply to all AIG members, irrespective of their grade of membership:

Non-compliance with the Code of Ethics has potential to undermine the standing and perception of our profession and this is at the core of our profession’s ability to undertake meaningful self-regulation.

Members are able to seek an opinion or advice on issues that they feel may represent non-compliance with AIG’s Code of Ethics from the Complaints Committee, which is provided in confidence.