Local students gathered at CQUniversity in Gladstone for a specifically designed two-day course to bridge their writing abilities between school and university and introduce them to the importance of safety in the resources sector. 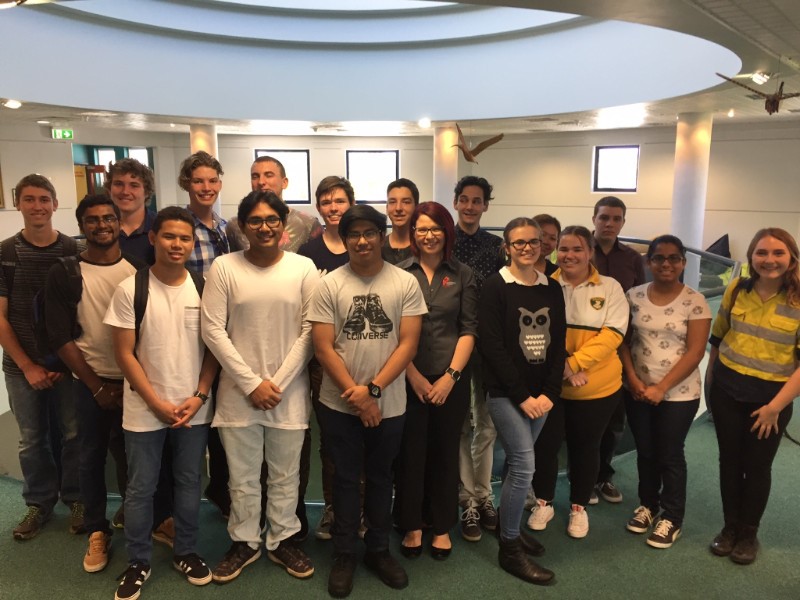 The Introduction to Safety, Industry and Academic Writing course was provided by the Queensland Minerals and Energy Academy (QMEA) and CQUniversity to prepare students who are moving onto university. The course provides the Science, Technology, Engineering and Maths (STEM) students with an introduction to safety delivered by QGC, an onsite visit to local industry and one-to-one discussions with an engineering team. All of students took a lot out of the experiences and were thankful for the opportunity to take part in the course, especially with university just around the corner.

Ian Macfarlane to take the helm at Queensland Resources Council

‘Ian has had a distinguished career in the federal parliament and for most of that time served as a Minister or shadow Minister in portfolios which included responsibility for the resources sector,’ Mr Udd said.

‘Ian is much admired in the resources sector for his deep knowledge of and affinity for the sector. He has proven himself to be bipartisan in his approach to policy and advocacy.

‘Ian brings to the role a deep knowledge of bureaucracy, government and industry players, which means that he will be able to hit the ground running.’

Mr Udd said that Mr Macfarlane had extensive experience working in the industry association space. Prior to his 18 year career in federal politics, Ian spent nearly seven years as president of the Grain Growers Association in Queensland.

Mr Macfarlane said that, after a brief interlude since he retired from politics earlier this year, he was well and truly ready to tackle the challenges facing the resources sector in Queensland.

‘The Queensland Resources Council is a highly respected industry peak body on both sides of politics and throughout the wider community and I am honoured to be asked to build on the excellent work of outgoing Chief Executive Michael Roche,’ Mr Macfarlane said.

Mr Udd said that an induction and handover process will commence next month and Mr Macfarlane will formally take over as QRC Chief Executive on 17 November.

This week’s commencement of the Mineral and Energy Resources (Common Provisions) Act 2014 (MERCPA) in Queensland comes after a long two-year wait since the Act was passed.

‘The Act includes a set of complex legislative amendments over a range of areas of resource legislation including land access and changes to the restricted land framework,’ Mr Roche said.

‘The Act also provides for a new coal and coal seam gas overlapping tenure framework in Queensland. This new framework will help unlock areas for optimal co-development and maximise the resources extracted on behalf of the state.

‘Many Queensland tenures are overlapping, including in the resource-rich Bowen Basin and today’s commencement of the Act will provide a process that reduces delay to get access to the ground and start activities.’

‘QRC has been working with its members on the new overlapping tenure framework for more than five years and without their ongoing support and commitment this new framework would not have been possible,’ Mr Roche said.

‘The Act also amends the land access process by placing an obligation on resource companies to register on title Conduct and Compensation Agreements made with landholders. QRC supports this amendment given it may allow people to be more informed about likely resource activity on the land.

‘The creation of an opt-out agreement is also a welcome initiative, after it was recommended through several previous reviews to offer another choice to parties that seek a flexible approach without removing the existing right to compensate for impacts.

‘The intent of the voluntary opt-out agreement is to simplify the process of two willing parties who wish to strike an agreement outside a structured regime.

‘Importantly the opt-out agreement includes a series of protections to ensure this new flexible option is not used in a way that disadvantages either party.’

An information sheet on the opt-out agreement has to be provided to the landholder and there is also a 10-day cooling off period.

Engaging Science Grants support science engagement and communication projects, events and activities that increase the reach and impact of science in Queensland.

More information about the grants programme is available here.

In AIG News 124 we talked about the thrill of our industry. How it can take you to places well off the beaten track, to places you never would have dreamed of going to. How it can challenge you both mentally and physically, working with people from all over the world who are enjoying the thrill just as much as you are. All of this while getting paid! Not a bad gig.

That’s all well and good for those who have the experience, skill and contacts to land that dream job, but how about for us early career geoscientists? (let’s call them ECgeos…it sounds cool…) What do we need to do to ensure we’re heading in the right direction in our careers, that we can survive the busts and thrive in the booms, land that dream job and have the career we’d hoped for?

That leads us into the topic of the next part of our series, covering the skills/traits considered valuable to employers, a topic of focus for the AIG National Graduate Group Geoscience Survey. As we did in AIG News 124, we’ll present the results from the survey and highlight the 4 common themes of Network, Attitude, Experience and Continuing Professional Development, revealed from the response.

Eight of the ten questions in the survey were targeted directly at discovering what skill/traits are essential for ECgeos. A list of all the relevant questions, their responses and some key comments are provided below.

Q1: What advice do you wish you were given during your early development?

Q2: What’s the best piece of advice you’ve been given?

Q4: What traits do you seek when looking to employ a graduate?

Q5: What advice can you offer to those wanting to survive the ‘busts’ and thrive in the ‘booms’?

Q6: Many students and graduates are concerned about the current downturn. What would you say to a student or graduate about that concern?

Q7: What are some of the most useful things you learnt during your time at university studying geology?

Q8: What level of study (i.e. Bachelor, honours, master and/or PhD) would you recommend and why?

Q9: Which geoscientist has been the most influential during your career and what did you learn from them that influenced it so greatly?

It may be stating the obvious but if you really want to do well in this industry (or any industry for that matter), it helps to love what you do. When our superiors were asked what they seek when employing a graduate, they overwhelmingly shouted words like enthusiasm, passion, initiative, inquisitiveness. Of course they did! Who wants to employ someone who doesn’t want to work for them? My guess would be no one. In fact, the theme of initiative and passion ran through most of the questions and that might be because it could be the difference between sinking or swimming when things get difficult. Imagine a common scenario where you’re in the middle of nowhere, mapping or drilling in the stinking hot sun, flies in your face constantly. You might not like it too much in that moment. But what if you were so intrigued with the story the rocks were telling you, that you didn’t really think too much about the heat or the flies? That intrigue and passion might be the difference between catching the first flight home or sticking it out to track down that company making ore body. Maybe that’s a load of bullocks but regardless, if you love licking rocks, you’re probably going to stick with geology rather than switching careers for accounting (ARGH!!).

Another piece of advice was to diversify your skill set/experience and broaden your professional network as soon as possible. Surviving the busts could be the difference between what you know and who you know or maybe there are no exploration geo jobs going but plenty of mine geo roles around. It could mean that you can navigate through some of those challenges more easily. It will also allow you to draw on that to use in other roles and it will provide a better understanding of the bigger picture.

Ok, so how about what you’ve studied at uni? Both the practical skills and the theory behind it? Well, the responses point squarely at diversity too and making sure you have the practical experience to put that learning into action. This came out overwhelmingly in question 8 when asked what level of study is recommended. All but a handful of respondents said a project based level of study before entering the industry is essential. Why? Well it brings together all the skills you’ve learnt over the years of your undergrad into one, focussed effort and makes you learn things like project management which aren’t specifically taught at uni. It screams loud and clear that you love licking rocks and accounting isn’t for you. All those things are what our superiors need from their ECgeos. They need someone who is keen, motivated, curious and has a good understanding of the basics of geology to form the foundation of which they build the rest of their learnings on.

To wrap it up, if you love geology, you’ll do well. If you have that, you’ll want to learn about it, want to contribute to it, want to taste it and find more of it. So take a breath, enjoy the ride, the rocks, the beer and the people who will love it with you.

Our next part of the series will cover the areas that graduates need improvement. See you then!

This article was published in the AIG News 125: September 2016. Click here to download and read the full publication.