The VALMIN Committee, in collaboration with its parent bodies (The AusIMM and AIG), will be conducting an extensive program of seminars around Australia, to build industry professionals’ understanding of the VALMIN Code, 2015 Edition.

These important professional development seminars will support the effective implementation of the revised VALMIN Code.

VALMIN 2015 has been updated to complement the changes in the 2012 JORC Code.

The seminars will be a valuable refresher for the experienced practitioner. And for those new to the use of the VALMIN Code, an introduction to the principles and key points to be aware of when preparing a technical or a valuation report.

A hypothetical case study will be presented to Illustrate the application of VALMIN 2015. Opportunities for Q & A sessions will be available at all seminars.

Roadshow workshops are being held in Adelaide, Melbourne, Sydney, Brisbane and Perth.  Refer to the attached brochure for venues, dates and times in each city.

Posted January 21, 2016
After an extensive review process, the VALMIN Committee announces the new VALMIN Code (2015 Edition) has now been approved by AusIMM and AIG.

The 2015 Edition of the VALMIN Code is available here.

The core purpose and principles of the VALMIN Code remain unchanged, but this new edition includes some important changes:

The revised VALMIN Code will be a key focus at the Project Evaluation Conference being held in Adelaide on 8-9 March. The conference will feature a keynote presentation by VALMIN Chair Louis Rozman, and a panel discussion involving VALMIN Committee members. Discounted registration is available to AusIMM and AIG members. More information regarding the conference is available here.

Compliance with the VALMIN Code is mandatory for AIG members.

The AusIMM’s Project Evaluation 2016 conference is presenting a conference built around a theme of ‘Good Practice and Communication’. This theme is intended to stimulate discussion around the importance of good practice for decision makers as either developers of, or investors in, mineral projects.

The conference will be held in Adelaide, South Australia, 8-9 March, 2016

Project Evaluation 2016 is the fourth in a series of conferences that commenced in 2007 in Melbourne. This conference series provides a professional forum for personnel responsible for undertaking technical assessments and valuations of mineral properties and projects and those who rely on them for nancial decision-making as developers or as investors.

The Project Evaluation 2016 conference Organising Committee is partnering with the VALMIN Committee to build an exciting conference program for the mineral project evaluation and valuation communities.

The peer-reviewed conference program will focus on recent advances, highlighting past problems and sources of error, the management of opportunity and risks as they relate to the preparation of mineral project evaluations and valuations.

What are the benefits of attending?

The conference brochure is available here.  The brochure includes the provisional conference programme and list of papers, and details of pre- and post-conference workshops on 7 and 10 March.

AIG joined AusIMM as a parent body of the VALMIN Committee and compliance with the VALMIN Code is required of all AIG members.

The conference is generously supported by the following sponsors. 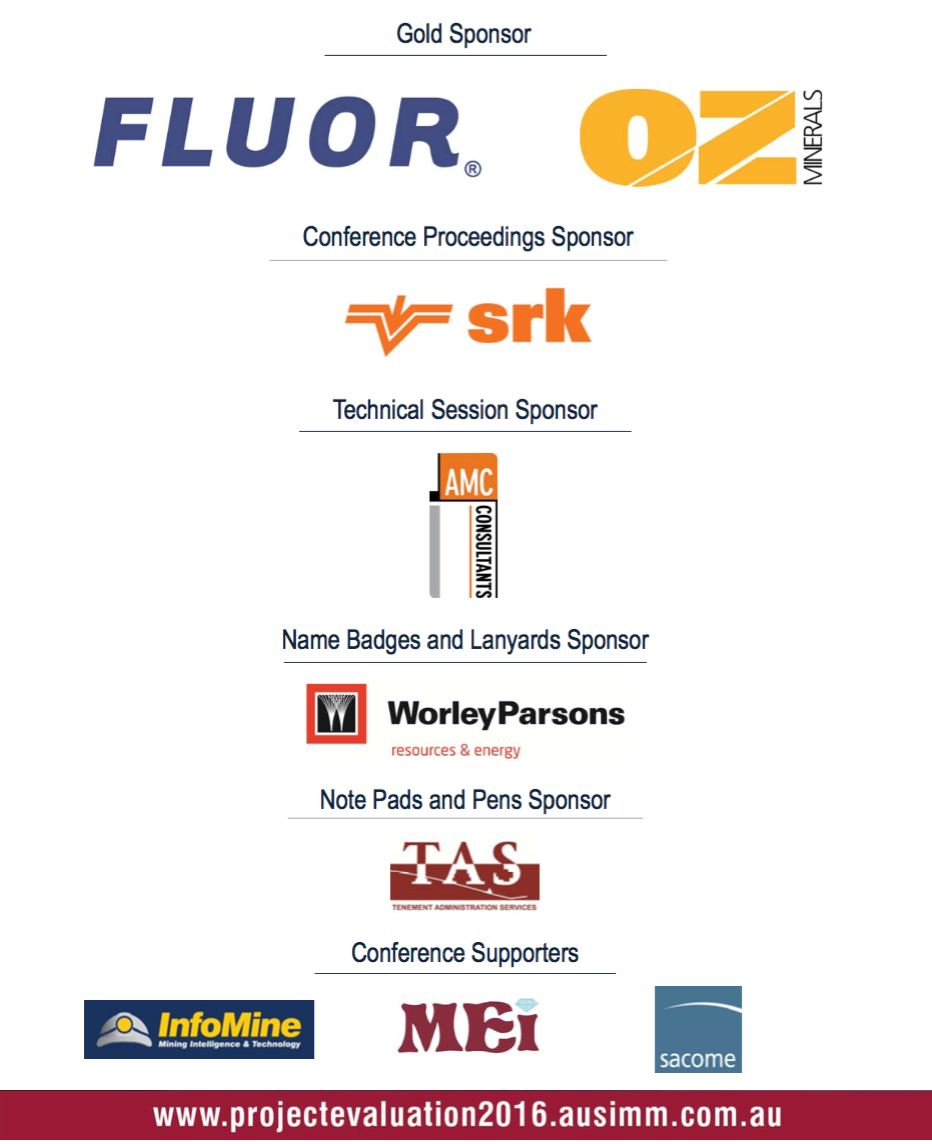 The VALMIN Committee is seeking to expand its number of committee members as it enters the next phase of the review of the VALMIN Code.

Over the coming months the Committee’s focus will be finalising the revision of the Code, and then moving to support effective awareness/communication and implementation of the revised Code.

If you would be interested in contributing as a member of the VALMIN Committee, please express interest by sending: a brief cover letter outlining your reasons for wishing to contribute and a current resume/CV by email  prior to COB Sunday 28 June.

Click here to register on-line via the AusIMM web site.

This webinar provides an opportunity to hear from members of the VALMIN Committee about the Exposure Draft and the changes to the VALMIN Code it proposes. There will be an opportunity for questions and answers after a presentation on the key changes suggested in the Exposure Draft. If you have a question you would like to raise, please email it through to contact@valmin.org to assist the presenters in addressing it for you as part of the webinar.

The webinar will be recorded and made available for viewing via YouTube as quickly as possible after the session. Advice regarding how to access the recording will be available on the VALMIN website.

The VALMIN Code is currently under review, and the VALMIN Committee has now released an Exposure Draft revised Code for comments.

Comments on the Exposure Draft revised VALMIN Code close on Friday 17 July 2015. All interested individuals and companies are invited to make a submission.

To review the Exposure Draft, and for instructions on how to make a submission to the VALMIN Committee, please visit the VALMIN website. Inquiries can be directed by email to contact@valmin.org.