The declining state of exploration in Australia

Any geoscientist working in mineral exploration in Australia over the past few years will tell you that the sector has been doing it tough.

Junior explorers have experienced difficulties raising capital.  There appears to have not been a lot of mid-tier to major company interest in exploration in recent years, with a few notable exceptions.   The industry as a whole has faced a growing burden associated with gaining access to land in the form of long lead times between applying for exploration licences and having them granted, and a mountain of red tape associated with permitting for even very low-impact exploration activities.

Australian Bureau of Statistics (ABS) mineral exploration expenditure statistics, released quarterly, and Australian geoscientist employment survey results, compiled by AIG since 2009, have recorded evidence of declining investment in mineral exploration in Australia, with consequences for discovery, development and retention of geoscientists with essential specialised skills, and the economic benefits experienced by the broader community especially in rural and remote areas.

The finger of blame is frequently pointed at the Federal Government as the ultimate steward of Australia’s economy.  Land and natural resource management, however, are state responsibilities.  Evidence suggests that different states are discharging these responsibilities with varying effect and success.

Land under exploration title in Australia

The proportion of each Australian state held under some form of exploration title has fallen steadily since 2011 according to information compiled by Doug Brewster, a Brisbane based AIG member (Figure 1). 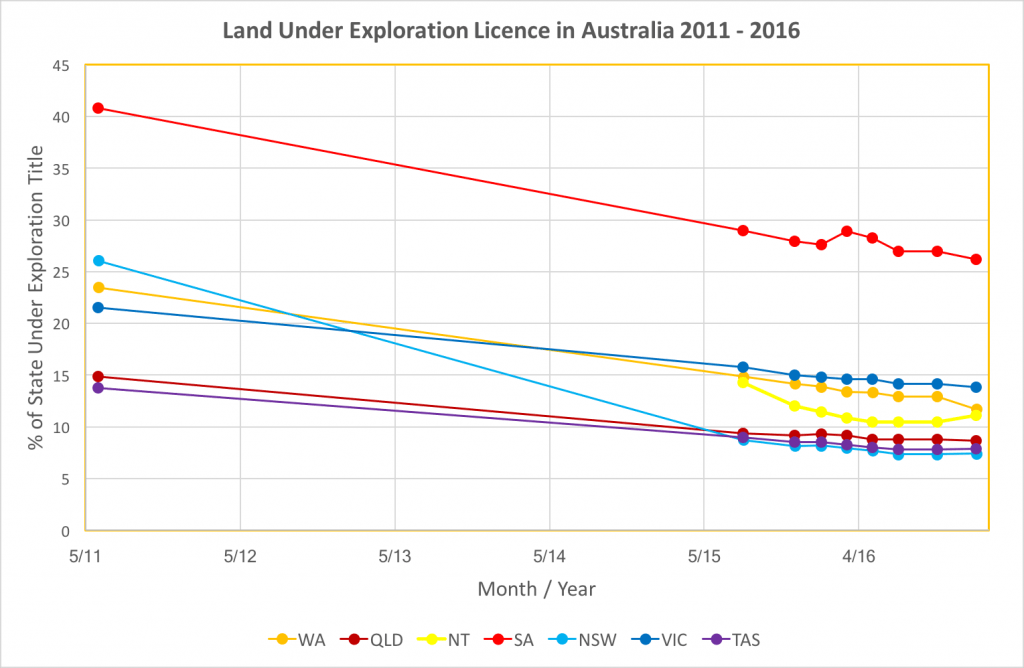 Figure 1. Proportion of the area of each Australian state held under exploration title 2011 – February 2017

The chart shows steady decline in the proportion of each state held under exploration title.  The rate of decrease has been greatest in New South Wales where the overall rate of decline has been almost double that evident in the other states, despite a recent slowing.

The important feature of this chart is that every state has experienced a decline in the area under exploration between 2011 and early (February) 2017 and that no end to, or even a significant slowing in the downward trend is in sight except for the Northern Territory in recent times).  The similarities in the rates of decline in each state is hard to conceive as being a coincidence, but the reason for this is considered to be elusive.

The more populous states are, by some, considered to create a greater compliance burden for explorers and, in doing so, discourage exploration.  Figure 2, which compares the proportion of each state under exploration licence and average population density suggests that there may be some evidence of this, but that its far from conclusive. 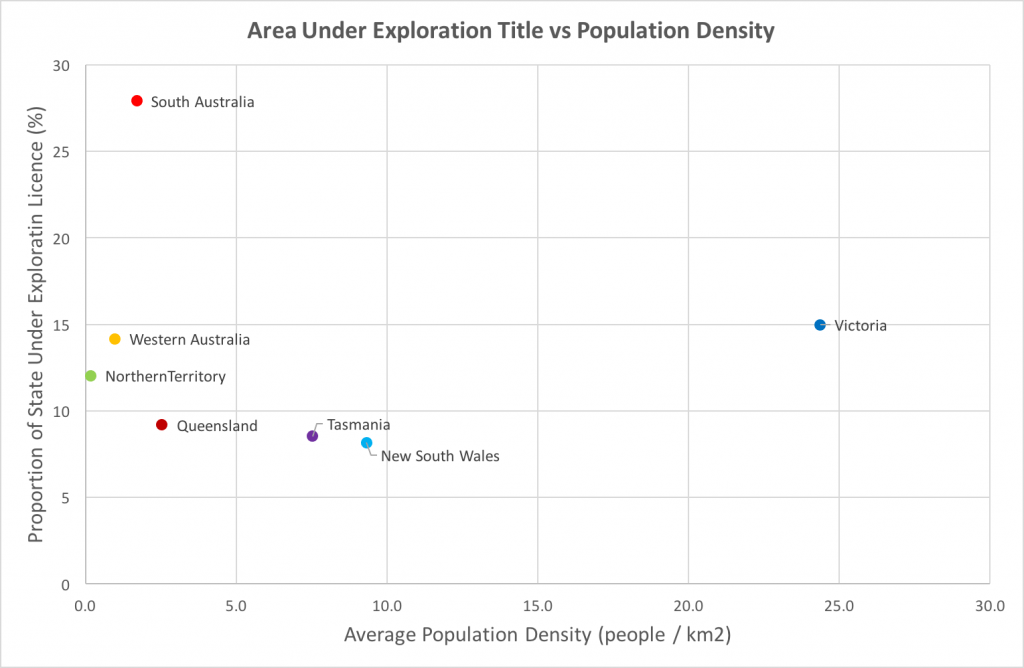 How is Australia perceived as a destination for exploration investment?

Canada’s Fraser Institute has been conducting an annual survey of mining companies since 1997.  One of the parameters derived from the survey responses is a Policy Perception Index (PPI).  While geologic and economic considerations are important factors in mineral exploration, a region’s policy climate is also an important investment consideration.  The PPI measures the overall policy attractiveness of the jurisdictions covered by each survey.   The index is based on survey responses to policy factors that a affect investment decisions including:

All of these, with the exception, perhaps, of trade barriers and security, are areas of State government responsibility.

The performance of each Australian state was examined over the past ten years by plotting the position of each state in the survey rankings to obtain a comparison of how Australian states are perceived relative to other jurisdictions for exploration investment (Figure 3). 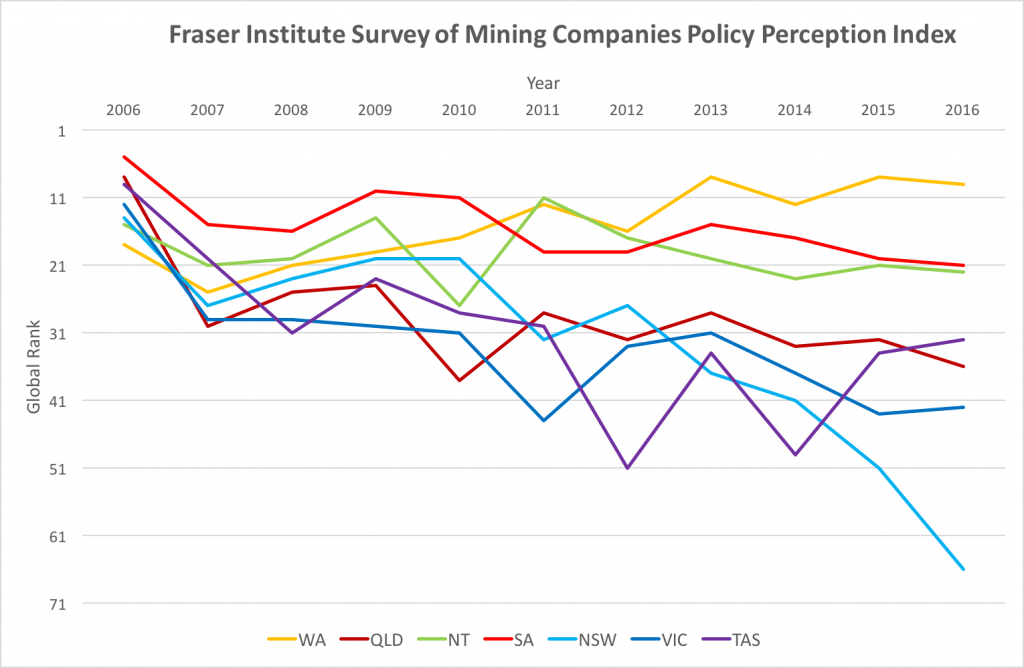 Figure 3 shows that over the past decade, the PPI standing of Western Australia has steadily improved, South Australia and the Northern Territory have remained more or less static, while every other state has fallen.  The policy perception index ranking for New South Wales exhibits  a sharp decline since 2012.  New South Wales was ranked 14th globally in 2006.  It ranked 66th in the world in 2016.  In comparison, in 2006 Western Australia ranked 18th in the world in terms of PPI.  In 2016 it was ranked 9th.

The actual PPI scores tell a slightly different story.  The actual scores for most Australian states are higher today than their lowest point in the past decade (Figure 4). 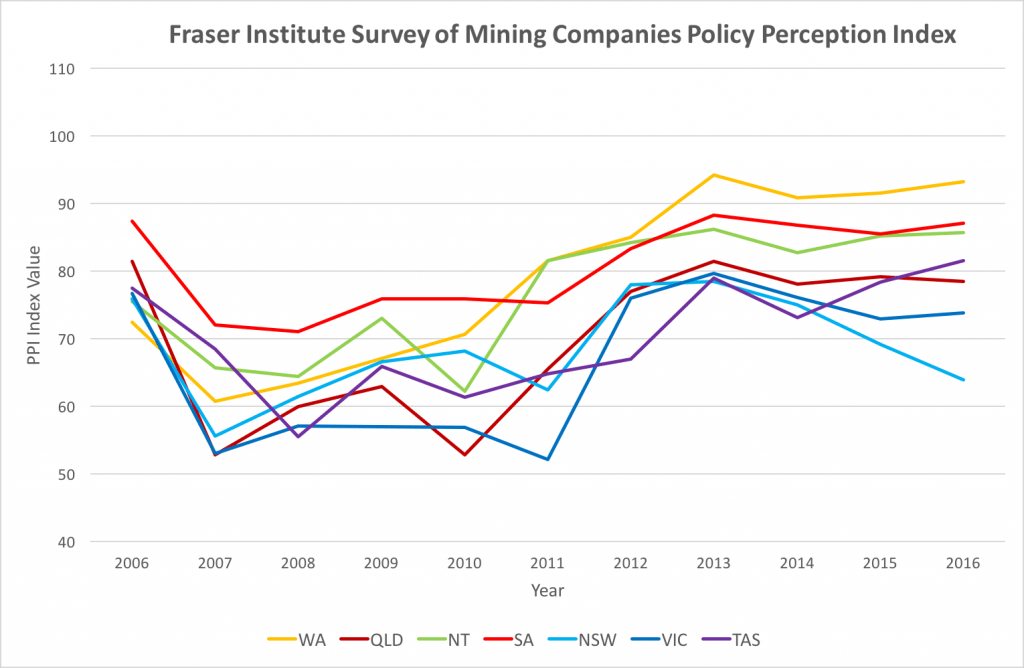 A case can be made that the policy perception index for most Australian states and territories have improved over the past decade.  The issue is, however, that competing jurisdictions have, clearly, improved more, arguably making them better placed as potential destinations for exploration investment.

A situation where only one state is exhibiting consistent improvement in terms of exploration investment attractiveness over the past decade doesn’t bode well for Australia.

Table 1. Who are we competing with?  Selected Fraser Institute PPI rankings from the 2016 survey of mining companies.

The jurisdictions that Australia’s states and territories are competing with is summarised in Table 1.

The Republic of Ireland had the highest PPI in the 2016 Fraser Institute Survey, followed by Saskatchewan, Sweden, Finland, Nevada, Manitoba, Wyoming, New Brusnwick, Western Australia and Northern Ireland rounding out the top 10.

South Australia and the Northern Territory ranked closely against Norway, Utah, Alaska, Spain and Canada’s Yukon Territory, but ahead of a number of U.S. states and Canadian provinces.

Victoria was perceived to have a PPI comparable with those of Ivory Coast, British Columbia and Zambia.

New South Wales joined Brazil, Russia, the Dominican Republic, China and Mozambique in the lower part of the rankings, but ahead of a number of countries including Papua New Guinea, South Africa, India, Kazakhstan, Indonesia and the Philippines.

Importantly, the highly ranked jurisdictions, with favourable regulatory and resources policy environments, are not developing countries.  The most highly ranked African nation, for example, Botswana, is ranked 12th globally and is the only developing nation in the top 25 positions in the survey.

What needs to be done?

Explorers need to compete for investment by generating projects that compete technically and commercially with others in a global market.  Countries, provinces and states that wish to have a viable minerals industry have a responsibility to ensure that there is a pipeline of projects to at least main that jurisdiction’s reserves, to maintain or facilitate expansion of their minerals industry.

The policy climate of each state and territory is something in their immediate control.  It is not constrained by local or global economic conditions or the outlook for commodities which do have a marked impact on the level of exploration investment.

The desirability of exploration investment: the policy settings and bureaucratic processors faced by explorers; is something that is completely within government control.

There is a compelling case for looking closely at what the top ten jurisdictions in the PPI ranking are doing right for guidance on the policy settings and regulatory environment required to ensure Australia remains a favoured destination for exploration investment.  The Fraser Institute Policy Perception Index and the area of each state and territory under exploration title provide clear and transparent measures of success in addressing this issue.

All levels of government have a role in achieving improvements, but primary responsibility rests with individual states to either continue efforts to remain globally competitive or address issues responsible for their declining global competitiveness.