This project is a collaboration between three universities and two geological surveys, with Geoscience Australia also involved through major geophysical and drilling programs. It is one of the key initial projects of the national geoscience exploration initiative, UNCOVER.

The origin and evolution of the Tasmanides have traditionally been explained in the context of a palaeo- Circum-Pacific convergent margin, which was oriented ~N-S (in present coordinates) and mostly involved W-dipping subduction (eg., Veevers, 1984; Fergusson et al , 1986; Collins, 2002; Glen, 2005). Such models explain the general N-S structural grain of the Tasmanides, but have difficulty in explaining orthogonal (~E-W) tectonic features. The STO is the major, arcuate E-W oriented structure in the Tasmanides, extending ~750 km broadly parallel to the NSW-Qld border. The interplay with Paleozoic deformation within the Australian craton is just beginning to be investigated (eg. Cayley, 2012; Veevers, 2013), but to date, little consideration has been given to how orthogonal (N-S oriented) tectonic forces have impacted on Tasmanides development. As such, the origin of the STO is an unanswered question, resolution of which may change the way we understand the geodynamic evolution of the Australian continent during the Paleozoic.

Fig 1. Map showing location of Southern Thomson Orogen (STO), which lies below the extensive cover of the Eromanga Basin. Only 1% of the STO crops out in the field area. Note the enigmatic E-W boundary with the Lachlan Orogen. (From Glen et al 2013).

Contrasting models of the central Tasmanides

Three hypotheses have recently been suggested for the origin and evolution of the STO:

Predictions of and tests for each model 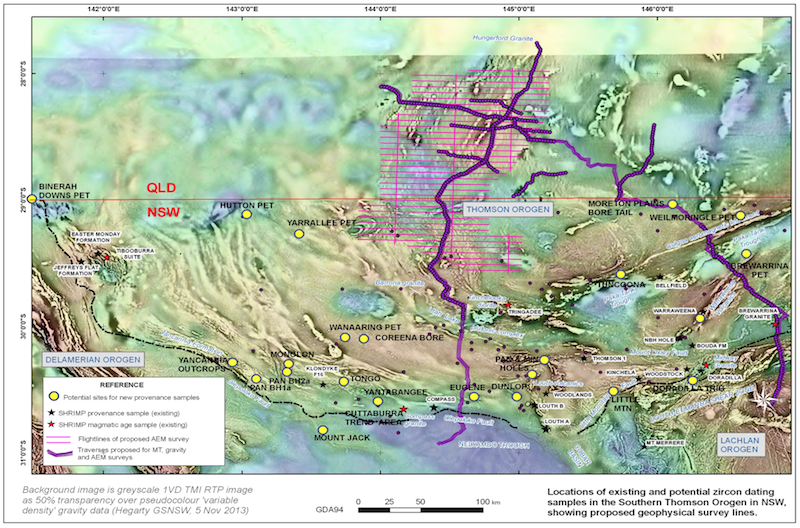 Cu deposits in BIF-like metamorphosed metasediments might be expected if Anakie equivalents exist in the basement (Model 1).

VHMS base metal deposits, and Ni in ultramafic schists (eg., Culgoa Magnetic Lineament) if the Warraweena volcanics are of Cambrian age. Similarly, it is likely that the Cobar Basin extends northward at least to the Olepoloko Fault, and possibly to the Culgoa Lineament(linear magnetic feature in central- east of Fig 2).

Porphyry copper-gold deposits might be expected if the arc is a correlative of the Macquarie arc.

Orogenic gold deposits are likely to occur in the deformed extensive turbidite piles to the N of the arc system, given the potential correlations with the Bendigo-Ballarat zone (models 2 and 3).

Volcanic or sediment-hosted Cu deposits equivalent to Girilambone group copper deposits are predicted by model 3 for sediments located south of the arc system.

Intrusion-related gold deposits associated with ~430 Ma granites are already recognised in the Tibooburra region, and along-strike to the east.

Tin deposits have been discovered in the 420 Ma old Brewarrina granite, and similar syn-kinematic granites are predicted from the geophysical maps of the region.

Professor Bill Collins is the Director of the NSW Institute for Frontiers Geoscience at the University of Newcastle. He has focussed his research on the interplay between magmatism and tectonics, using the integrated information to highlight the role of protracted extensional tectonics in the origin of the Tasmanides. More recently, he has been using Hf isotopes in zircon to provide new avenues to understand Tasmanides tectonics, and is applying this isotopic approach to understand global geodynamics. He was a member of the implementation committee for progressing the UNCOVER initiative, which has a focus on exploration geoscience in Australia. He will be discussing how he has used the UNCOVER initiative to gain Australian Research Council (ARC) linkage project success. 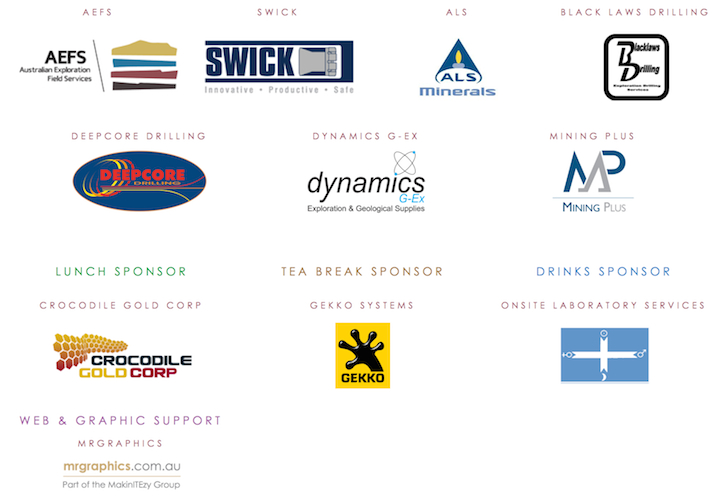