Australian geoscientists reported a deterioration in employment in the first three months of 2020.  Fears, however, that the coronavirus pandemic would have a deep and dramatic impact on employment, have not as yet materialised.

“Widespread speculation that the coronavirus pandemic would have a rapid and dramatic impact on geoscientist employment across Australia, where more than 70% of geoscientists work in mineral and energy resource exploration, mining and production, isn’t borne out by the latest survey results,” Australian Institute of Geoscientists’ President, Mr Andrew Waltho, said today.

“The first quarter of each year is frequently marked by an upturn in unemployment, with exploration fieldwork in particular reduced following the summer holidays and northern Australian wet season,” Mr Waltho said. “We have not to date seen anything like the dramatic downturn in employment associated with the global financial crisis in 2009,” he said.

“It is a welcoming sign to see that many employers, so far, have been able to retain geoscientist staff, demonstrating a commitment to both their people and business resilience, especially when the proportion of geoscientists employed by small to medium sized companies is considered.

“Geoscientists, however, haven’t escaped entirely unscathed. Self-employed geoscientists working as consultants and contractors are experiencing a downturn in their ability to secure work greater than is normally evident at this time of year, which we should expect to be reflected in exploration and mineral resource production,” Mr Waltho said.

The decline in employment nationally was not even.

Unemployment amongst geoscientists increased in every state except Queensland where unemployment was little changed between December 2019 and March 2020.  Unemployment in Western Australia increased by 1.6%.  The greatest increases  were recorded in Victoria (11.1%) and South Australia (13.8%).

Under-employment amongst self-employed geoscientists increased significantly in all states except Queensland, where again, little change was observed in the quarter.

Long-term unemployment remains the darkest aspect of the survey results with almost 29% of survey respondents reporting that they have been out of work for more than 12 months.  Six percent of respondents were looking to pursue careers beyond geosciences on a long-term basis. A further 12% were seeking work to help them deal with current employment conditions affecting geosciences in Australia.

“In one sense, the survey results are re-assuring in the initial impact on employment of the coronavirus being more muted than many geoscience professionals feared,” Mr Waltho said.

“The potential for more severe impacts on employment remain.

“The situation, however, has some way to run and AIG will now be looking to the June survey to demonstrate how Australia’s minerals and energy exploration and mining industry is coping with the impacts of the pandemic.

“The need to move to a new way of working is affecting everyone in Australia to some extent.

“The AIG’s priority is to continue to deliver professional development and networking opportunities to members using on-line delivery of seminars, and short courses allowing exchange of information between members,” Mr Waltho said.

“Some of these new ways of working may well outlive the impacts of the pandemic, but ultimately geoscientists, particularly those working in exploration, need safe and effective access to land to deliver results. Returning to a safe and effective means of accessing land will be essential going forward,” he said.

The next survey will open for contributions at the end of June 2020.

Employment opportunities for Australia’s geoscientists continued to show a very slowl-improving trend, despite disappoini.ng results for the second quarter (April to June).

Half of Australia’s geoscientists who are currently unemployed have been without work for more than 12 months.  A similar proportion sees little prospect of regaining employment in their field in the year ahead.  Almost one in ten unemployed geoscientists are looking to leave the profession, seeking more stable employment.

“There is little doubt that junior exploration and mining companies especially are experiencing difficulty raising capital to fund new exploration and producers are having to deal with considerable uncertainty and price volatility, at least partly due to trade tensions between the USA and China” Mr Waltho said.

“The increase in work secured by self-employed geoscientists is most welcome, especially in light of the sharp increase in under-employment observed in the previous survey,” Mr Waltho said.

“Long term unemployment is the big issue in these figures.  Half of Australia’s unemployed geoscientists have been without work for 12 months or more, and a similar number see no new opportunities on the horizon,” he said.

“Professional institutes, including AIG, are doing whatever we can to help members remain in touch with their colleagues and peers and maintain their skills, but it’s pretty hard to remain motivated when industry conditions appear to be stagnant,” Mr Waltho said.

The employment situation varied significantly between states in the latest survey results.

Queensland, New South Wales, South Australia all recorded increases in both unemployment and under-employment.  Only a small number of responses were received from geoscientists working in the Northern Territory and Tasmania, which indicated near-full employment of small pools of local geoscientists.

The latest instalment in AIG’s Australian geoscientist employment survey series is open for contributions. Click here to complete the survey.

This survey will provide data on trends in geoscientist employment in Australia during the first quarter (January, February, March) of 2019.  In the final quarter of 2018 quarter, the Australian geoscientists unemployment rate continued a gradual, downward trend, but increased from 8.3% at the end of September, to 9.1% at the end of December.  Underemployment amongst self-employed geoscientists increased markedly. There is still a general perception that exploration and mining investment is strengthening in Australia, but this may not be flowing through to strongly improved employment prospects for geoscientists.

The survey takes only two or three minutes to complete.  You do not need to be an AIG member to contribute.  No data that could personally identify respondents is collected.  Contributions to the survey are required from both employed and unemployed geoscientists to ensure the relevance of results.  Your completing the survey really helps to make a difference to the standing and knowledge of our profession.

The survey will be open for contributions until 28th April 2019.  Every contribution adds to the reliability of the survey results.

Sincere thanks in advance for your continued support.

Signs of light at the end of the unemployment tunnel?

The latest AIG Australian Geoscientist Employment Survey results for Q4 2017, reviewed today, show that geoscientist unemployment in Australia fell dramatically from 12.2% in Q3 2017 to 7.0% at the end of Q4.

Underemployment also fell from 18.0% to 12.3% in final three months of last year. 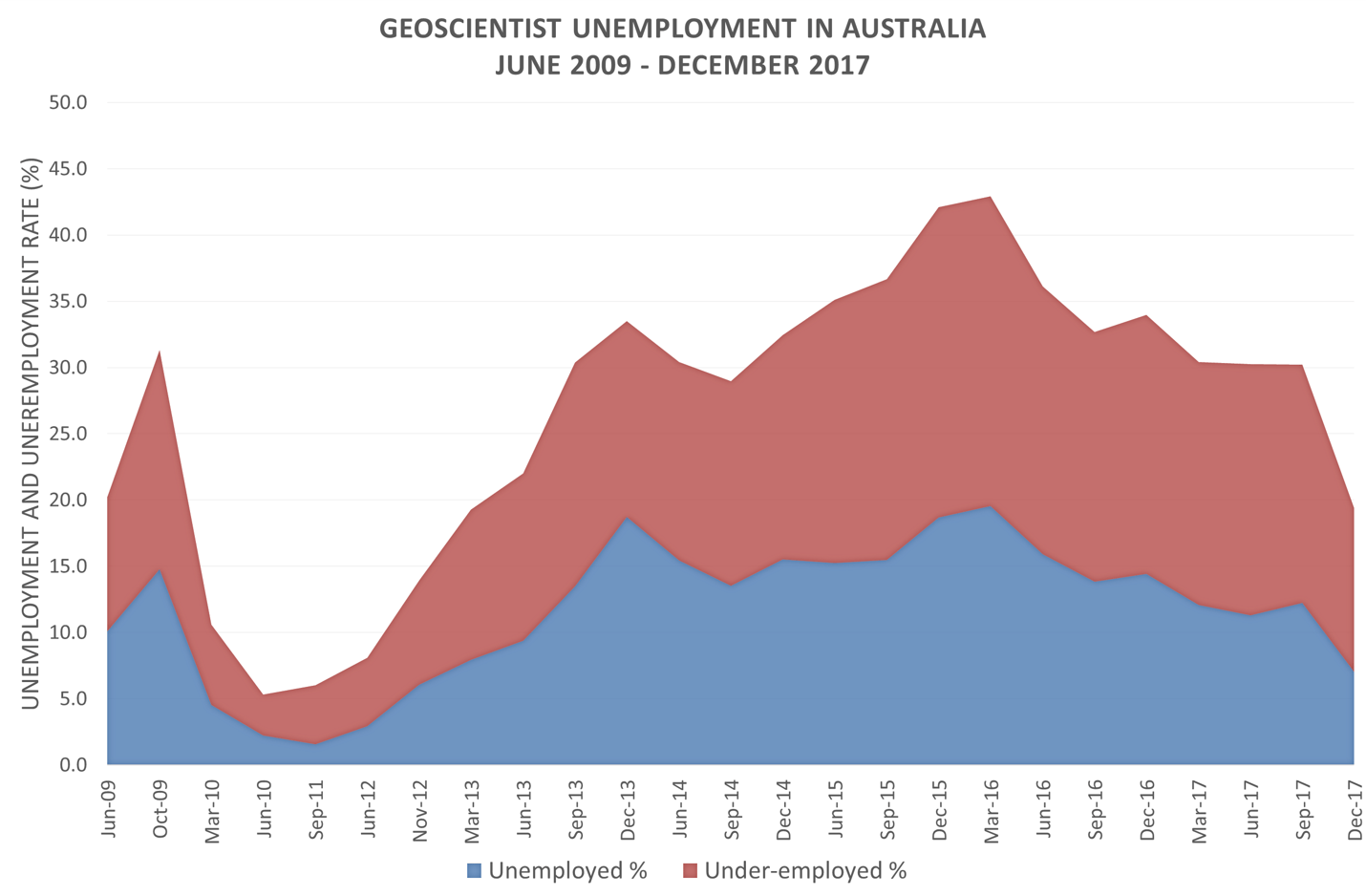 A more complete analysis of the survey results is being prepared.  Watch this site for details.

The 2017 September quarter Australian geoscientist employment survey is open for contributions until 21st October.  You can complete the survey here.

This survey will provide data on trends in geoscientist employment in Australia during the third (June to September) quarter of 2017.

The June 2017 employment survey showed that unemployment and under-employment for geoscientists continued to improve, although the rate of improvement was observed to differ markedly between different sectors of our profession.  Mineral exploration fared worse than metalliferous mining and energy resource exploration and production.  The survey results supported a broader perception of improving employment conditions for mining professionals but demonstrated that Australia’s mineral project pipeline remains fragile due to a lack of exploration contributing to new discoveries needed to sustain the industry.  Exploration investment, however, has also increased according to Australian Bureau of Statistics figures.  This survey will provide data on whether this has contributed to improved employment opportunities.

AIG needs your support by completing this survey.  The survey results are reported widely and used to promote and inform others of the health of our exploration and mining industry.  The data supports advocacy by AIG on the need for responsible, sustainable resource exploration throughout Australia.

The survey takes only two minutes to complete.  You do not need to be an AIG member to contribute.  No data that could personally identify respondents is collected.

The survey will remain open for contributions until 21st October but please take two minute to complete it now.