Posted on 30 June 2013 | Updated on August 23, 2013 23:58
The AIG Australian geoscientist employment survey for the June quarter of 2013 is open for contributions.  Please click here to complete the survey, which only takes a couple of minutes to complete and provides AIG and kindred societies valuable data needed to represent geoscience professionals in Australia on employment related issues. 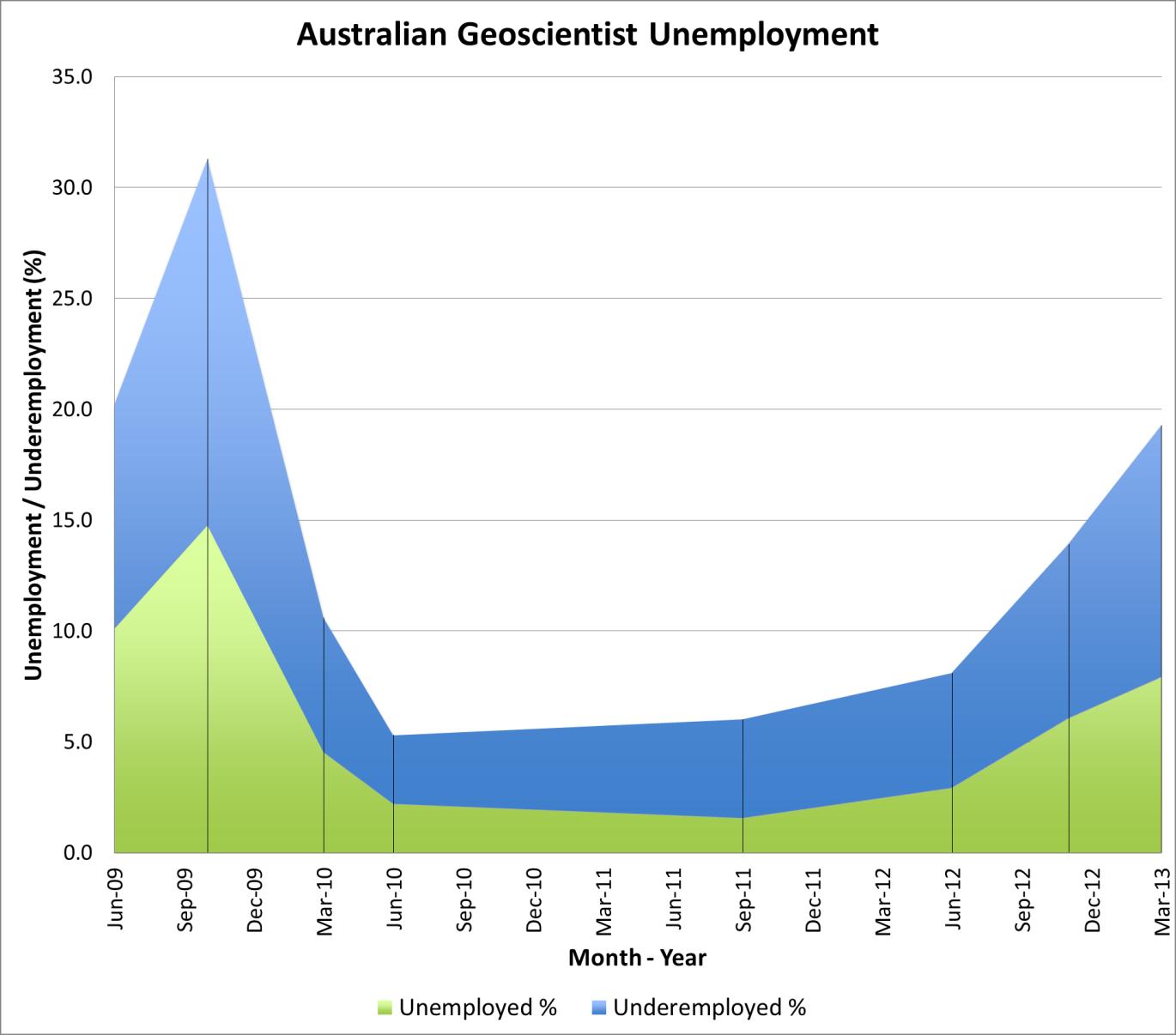 The previous survey in March 2013 showed a further deterioration in geoscientist employment that commenced at the end of 2012. Since then, anecdotal evidence suggests that this trend has continued, if not accelerated.

The surveys are becoming well regarded as an early indicator of the health of the exploration and mining sectors in particular.  All AIG members are encouraged to complete the survey and to recommend it to their colleagues. The more people who contribute, the more reliable and authoritative the survey results.

The survey will be open for contributions until 12 July.  Please contribute by completing the survey today.

Support for Exploration in Queensland Budget

The Queensland Exploration Council (QEC) was launched by the Queensland Resources Council in late 2010 with the mission of positioning Queensland as ‘an exploration leader by 2020’.

QRC Chief Executive Michael Roche said it was highly significant that the state Treasurer, no doubt with the strong encouragement of Mines Minister Andrew Cripps, had placed the government’s embrace of exploration’s importance ‘squarely on the record’.

QEC Chairman Geoff Dickie said the allocation of $30 million over three years to support Geological Survey of Queensland initiatives was tangible evidence of the government’s intent to get behind the state’s exploration sector.

‘Accurate and accessible geoscientific information is a major pre-cursor to exploration investment,’ Dr Dickie said.  ‘Queensland is in full-on competition for the exploration dollar – both domestically and globally. ‘The high minerals and energy prospectivity of the state does not mean that explorers must beat a path to our door. But at the back of every explorer’s mind is the dream of finding another Mount Isa.’

‘It’s encouraging that despite budget constraints, the state government is investing in the long-term by strengthening the foundations for discovery,’ he said.

Mr Roche said that despite a sombre global price outlook and increasing competition from lower cost producers, Queensland’s minerals and energy sector was being forecast by Treasury to return around $14 billion in royalties over the next four years, including the start of major contributions from the export coal-seam gas industry.

‘The budget papers give a lie to predictions of the waning importance of coal, with Treasury forecasting that the coal industry alone will contribute $11 billion in royalties to taxpayers over the next four years. ‘The downside for coal is that this budget locks in an uncompetitive set of coal royalty rates from last year’s budget and leaves Queensland producers with among the highest effective taxation rates in the world,’ Mr Roche said.

A draft Australian Productivity Commission report, issued 31st May 2013, has highlighted difficulties being experienced by the exploration sector in Australia due to increasing costs and red-tape associated with exploration approvals.  According to the Commission, Operating costs are rising, rates of discovery are falling, and Australia is becoming relatively less attractive to international firms as an exploration destination.

While exploration represents only a small share of the economy, the Commission notes that its importance is in sustaining Australia’s much larger resource extraction industry.  All tiers of government in Australia are seeking to regulate exploration in some form to the detriment of the sector.   The community, as the owners of the minerals and energy resources, benefit from exploration, as does the resource industry. But equally, the rights of current landholders, communities and areas of environmental and heritage value need to be safeguarded, the Commission argues.

The Commission’s Deputy Chairman, Mike Woods, said ‘there are several key areas where regulations can be made less burdensome for explorers while maintaining these important safeguards. In particular, the Commonwealth, State and Territory Governments have overlapping and duplicative environmental and Indigenous heritage regimes, but they have it in their power to agree on more efficient accreditation arrangements’, Mr Woods said.

The draft report also proposes that the criteria for awarding exploration licences and the outcomes of tender processes should be published; Ministers should be required to give reasons for their decisions regarding exploration licences; and heritage registers should be established, to avoid repetitive heritage surveys.  The Commission also highlighted the need for approval processes to be proportional to the potential impact of exploration activities on competing land uses.  “The impact of an aerial survey is a very different impact to putting a well in somebody’s crop land and so the regulation needs to be appropriate and proportionate to what the actual impact is” according to Mr Woods.

A focus of several recommendations is to improve the certainty and transparency of the development and administration of regulations. This will benefit all stakeholders – resource explorers, farmers, conservation groups and the wider community.

‘There needs to be greater community engagement when governments make land access decisions, but the debate needs to be grounded in sound evidence about the environmental, social and economic impacts of particular exploration activities’, Mr Woods said. ‘Regulation needs to evolve alongside gains in the scientific knowledge base.’

The Commission noted that Australia is highly regarded internationally for the accessibility and quality of the pre-competitive data provided by its geological survey organisations.

The Commission’s terms of reference were restricted to examining non-financial barriers to exploration, effectively preventing examination perceptions of sovereign risk created by recent Commonwealth government policies including imposition of the Mineral Resources Rent Tax, access to the diesel fuel rebate by mining companies, taxation incentives for exploration and fiscal incentives to help make capital mode available to junior explorers, including flow through shares long advocated by industry as a means of reducing cyclicity in exploration investment.

A copy of the draft report is available here.

The release of the draft report attracted a strong response from industry groups.  Media reports highlighted the importance of exploration as a driver for the Australian mining industry.  The Association of Mining and Exploration Companies (AMEC) is pleased the draft report recognises the challenges facing the industry.  AMEC national policy manager Graham Short says he would like governments to follow the lead set by explorers.

“Industry is already taking some of the hard decisions, trying to reduce costs, increasing its own productivity and efficiency and now it’s a matter of government and agencies doing the same thing.”

The Commission is seeking responses to this draft report and will be holding public hearings.  AIG is seeking feedback from members to help frame a submission to the Commission.