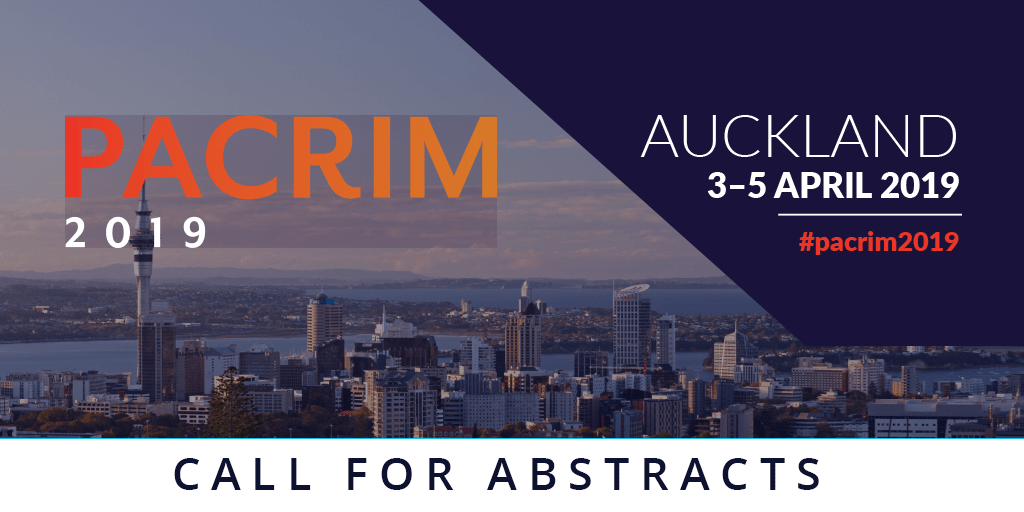 PACRIM 2019 will be held in Auckland New Zealand, 3-5 April 2019 by AusIMM with the support of kindred societies and professional institutes.

The theme of the conference will be mineral systems of the Pacific rim.

This call for abstracts seeks the submission of practical and applied case studies for presentation at the Congress.

Please submit your abstract not exceeding 300 words via the speakers portal on the conference website, pacrim.ausimm.com

The organising committee encourages collaborative works and urges young professionals and students to make submissions and participate in the extensive and technical networking opportunities this Congress will offer.

The Congress will also offer a series of workshops and field trips in New Zealand and the western Pacific for professional development, and a full social program for additional networking opportunities.

We welcome abstracts with a geophysics and multidisciplinary focus that fall under any of the Congress themes.  Further details regarding the conference are provided by the flyer, available here.

Recent personal experience has highlighted the importance of every day document management for geoscientists working in industry or government.

The AIG Code of Ethics requires compliance with professional standards for balanced, material and transparent public reporting of exploration results, mineral resources and ore reserves (the JORC Code) and valuation of mineral securities (the VALMIN Code).  These codes of practice invariably require production of reports.  But they are not the only activity that requires geoscientists to document interpretations and actions of geological data, or exercise judgement in the course of our work.  Commercial disputes or perceived non-compliance with corporations, privacy and other laws can result in work performed by geoscientists becoming legally discoverable in the course of preparing for court action.  It’s not just the Complaints o Ethics and Standards Committee to which we may need to demonstrate sound professional practice.

There are several measures that have proved to be useful in my experience.

What is your experience?  Do you have additional experience and ideas that can contribute to good practice by others?  Leave a post on this page to continue the conversation.

A review of AIG’s Code of Ethics, Complaints and Ethics and Standards processes is nearing completion.

The review of AIG’s Code of Ethics and complaints process was initiated in April 2018.  Several, valuable submissions were received from members and considered during review.

Interim results were presented to the AIG Council at it’s recent, annual face to face meeting in Sydney, where several additional questions were raised.  Legal advice on these issues is currently being sought.  The review will result in changes to the Code of Ethics that will be presented to members for consideration and review by members at an extraordinary general meeting of the Institute by the end of 2018.  The changes will be designed to ensure that the Code of Ethics remains a viable set of principles, to support AIG’s role of maintaining demonstrably high standards of professional practice by members.

The revised Complaints and Ethics and Standards processes include a timeline for notification and review of complaints relating to practices of members.

Complaints relating to the professional conduct of AIG members may be lodged by any member of the public.  Complaints must be lodged in writing, by email to aig@aig.org.au or using the on-line form provided on the AIG website.  A description of the complaints process is also available on the website.

Complaints and Ethics and Standards Committees

Two complaints have been received since the AIG AGM in May.

One complaint is currently being considered by the Ethics and Standards Committee.  The second resulted in the member being confidentially advised of an adverse finding in relation to compliance with the JORC Code (2012).

The announcement in which the member was nominated as the Competent Person included the following shortcomings:

The member was advised to carefully review the announcement in relation to the relevant sections of the JORC Code (2012) to prevent recurrence of the identified shortcomings in future work as a Competent Person and given 14 days to submit an appeal relating to the Ethics and Standards Committee decision.

Review of the nominated sections of the JORC Code by all members acting as Competent Persons is recommended.

AIG members are advised, with sadness, that Dr Patrick Williams passed away in the UK late last week, following a protracted illness.

Dr Williams (Pat) joined the staff at James Cook University (JCU) in 1989 and continued in a lecturing role until the amalgamation of Earth Science with TESAG around 2007 when he resigned to become a consultant.

He was a major contributor to the Key Centre in Economic Geology, the Predictive Mineral Discovery CRC and the Economic Geology Research Unit (EGRU) team  at JCU. He supervised and mentored  many honours and doctoral students during his academic career, and was much valued in that role. He was also much valued as an academic colleague by this who worked with him – always good council,  supportive of group activities and delivering of the tasks on his plate.

Pat is recognised by his colleagues for a major contribution to undergraduate teaching in mineralogy, petrology and economic geology. Pat developed a strong research interest in mineralization in the Mount Isa Inlier and became a widely acknowledged expert on IOCG deposits, an ongoing interest that he carried into his post-academic consulting life.

Dr Williams will be missed by the economic geology community in Australia and beyond, and his many friends in North Queensland.

What is continued professional development and why is it a good thing?

Graduation from university with an Earth science degree represented a major learning milestone that enabled you to begin your geoscience career.  It also represented the start of the next phase in your professional, technical and personal development through continuing development as a professional.

Continuing professional development, or CPD, is work-related learning that should continue throughout your career.  The year in which new professionals enter the workforce is usually a period of intense, on the job learning in a diverse range of areas such as field and mapping skills, sampling, core logging, managing contractors, landowner liaison and mining title management, to name but a few.  University studies provide an essential and solid grounding in geological principles, Earth systems, scientific method and research skills, which must be supplemented by a broad spectrum of new skills that are based on elements of these fields and represent workplace essentials.

In many professions, CPD forms an integral part of a licence to practice.  More professions require a managed and verifiable commitment to CPD than not.  The dominant reason for this this is the perception of public risk associated with practice of the profession in question.  Medical professionals, for example, may be called on to make decisions that could affect someone’s life.  Engineers design and build structures and machines that could create public safety risks or have profound economic consequence if they fail.  Teachers shape the character and skills of young people who will be the backbone of our society in future years.

Geoscientists have the privilege of being self-regulating.  There is no universal requirement for professional registration and licencing of geoscientists in Australia.  This does not, however, diminish the need for, and value of CPD.  It remains one of the key mechanisms by which high standards of professional practice and the relevance and currency of qualifications and experience are maintained.

CPD is frequently described as an investment for both individuals and employers as it involves maintaining enhancing and extending your knowledge expertise and competence.  It is central to the definition of professionalism recognised by the general public, where professionals strive to become leaders, knowledgeable, sources of advice and able to reliably solve problems in their chosen fields, which sets them apart from the rest of the pack.

CPD requires an investment of time, but the cost of CPD does not need to be onerous due to the range of activities that fall into the three categories above.

Join a discussion of CPD and professionalism on the AIG Linkedin Group.

The Australian Institute of Geoscientists’ Student Bursary Program was initiated to promote and support geoscience research and education in Australia. The Bursary Program began in 2001 to mark the 20th Anniversary of the Australian Institute of Geoscientists (AIG) and, since then, the AIG has awarded 199 bursaries to geoscience students in Australian universities. In 2018 the AIG is again offering bursaries to Honours, Postgraduate and Third Year geoscience students.

The 2018 Bursary awards, which have values between A$1000 and A$4000, are funded by the AIG, by
the generous sponsorship of the individuals and organisations listed on page 4, and by donations from AIG members to the AIG Geoscience Education Foundation.  Visit this page for more information

Have you contributed to the latest Australian Geoscientist Employment Survey?

The latest instalment in the Australian Geoscientist Employment Survey series is open for contributions until this Saturday 21st July.

The latest instalment in this survey series is designed to provide data on trends in geoscientist employment in Australia during the second quarter (April to June) of 2018.

Please contribute to the survey personally, encourage your peers and colleagues to participate and share news of the survey via social media.  We need as many contributions as possible from Australian geoscientists working or seeking work in any sector of our profession.  You do not need to be an AIG member to contribute – we would like to hear from as many geoscientists working or seeking work in Australia as possible.

The data collected by this series of surveys helps AIG to develop a consistently based, robust and reliable view of employment trends affecting our profession.

The first quarter 2018 survey showed the recovery in geoscientist employment evident in the latter half of 2017 had stalled. 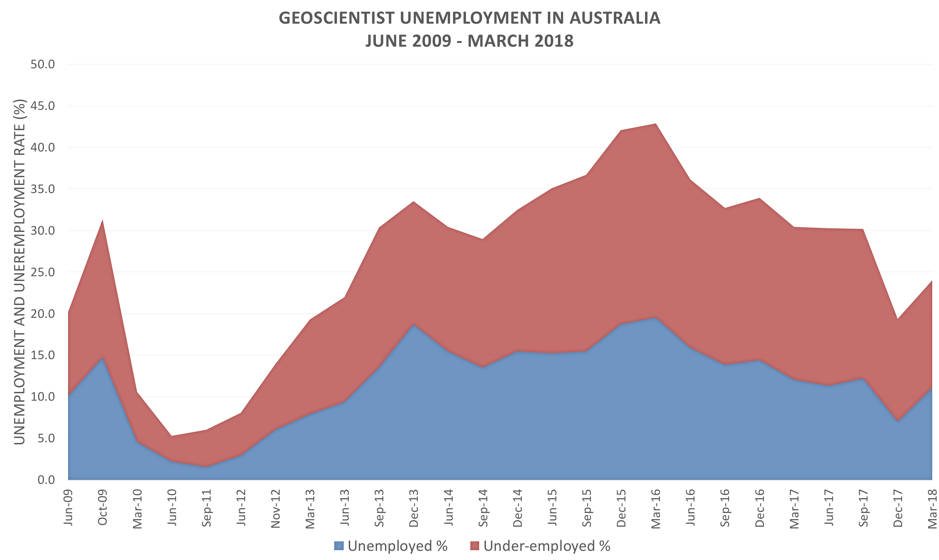 The general feeling, however, is that prospects for geoscience employment in Australia, particularly in exploration and mining, should be improving as a result of increased investment across Australia.  How this is translating into jobs will be demonstrated by the survey results.

No data that could personally identify respondents is collected.  Contributions to the survey are required from both employed and unemployed geoscientists to ensure the relevance of results.