The Australian Institute of Geoscientists Annual General Meeting for 2015 will be held at 5:30 pm on 20 May 2015 at the Irish Club of WA, Subiaco WA.

Seven Council positions will be open for election.  Nominations from members should be received by Ron Adams, AIG Secretary, by 5:00 pm (WST) 30 April 2015.  Nomination and proxy forms and a list of Councillors seeking re-election will be available here, on the AIG web site, soon.

Please mark this date in your diary. 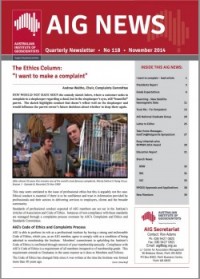 AIG members will be aware that AIG News, the Institute’s quarterly membership newsletter, will be published on-line from this month (February 2015).

The move to on-line publication will be accompanied by changes in format, with the newsletter moving to a full colour magazine presentation, and allow the inclusion of links to additional content, including links to additional reading and other background materials delivered via the AIG web site and other sources, or videos hosted by the AIG YouTube channel.  AIG News will be produced by a Victorian graphic design and publishing company, MRGraphics, owned by Fiona Makin.  Fiona is a geoscientist who leads a small team of graphic designers and programmers that underpin a dynamic and innovative small business.

The on-line editions of AIG News will, of course, be freely accessible by members.  AIG News will remain a quarterly publication.

Members will also have the ability to download a print-ready version of each edition for free, purchase a printed copy of the magazine to be posted on an issue by issue basis.  Non-members will have the option of purchasing individual issues or an annual subscription to AIG News through the AIG e-Shop which will be on-line soon for electronic delivery or in printed format.

The move to electronic publishing and delivery of AIG News will both help AIG to maintain low costs of membership while, at the same time, providing members with a high quality source of news and information as part of their Institute membership.

The changes to AIG News will be implemented gradually during 2015 but we hope that members will see and appreciate the difference in the publication’s delivery and content.

The move to electronic publishing also allows advertisers to reach their audience with the aid of colour advertisements and to incorporate links to additional information, such as additional product information, presentations and videos.  Advertising rates will be reviewed during 2015 but, for now, remain at the rates published in the November 2014 issue.

Any questions or comments about the direction of AIG News may be posted here, or sent by email to the Publications Committee.

Hydrogeology in Mining – Call for Papers

Hydrogeology in Mining: a one day conference to be held in Adelaide SA, 1 May 2015.

Following the success of AIG South Australia Branch’s inaugural hydrogeology conference in 2014, the organisers invite proposals for presentations (call for papers) about hydrogeology in mining: exploration, geophysics, water supply, dewatering, impact assessment, monitoring, compliance, closure etc; or an overview of a particular issue related to the hydrogeology in mining.

If interested in presenting, please send a page abstract to gaborbekesi@austwaterenv.com.au  by Friday, the 27th February 2015.

Click here for the conference circular or visit the AIG web site for additional information and on-line registration details.

Is your email address up to date?

AIG membership renewal notices will be distributed in May and although that’s still a few months away it’s worth checking now that your contact details are up to date.

As an AIG Member, you now have access to the Membership Portal, accessed via the Membership Login button in the header of every page of the AIG website. 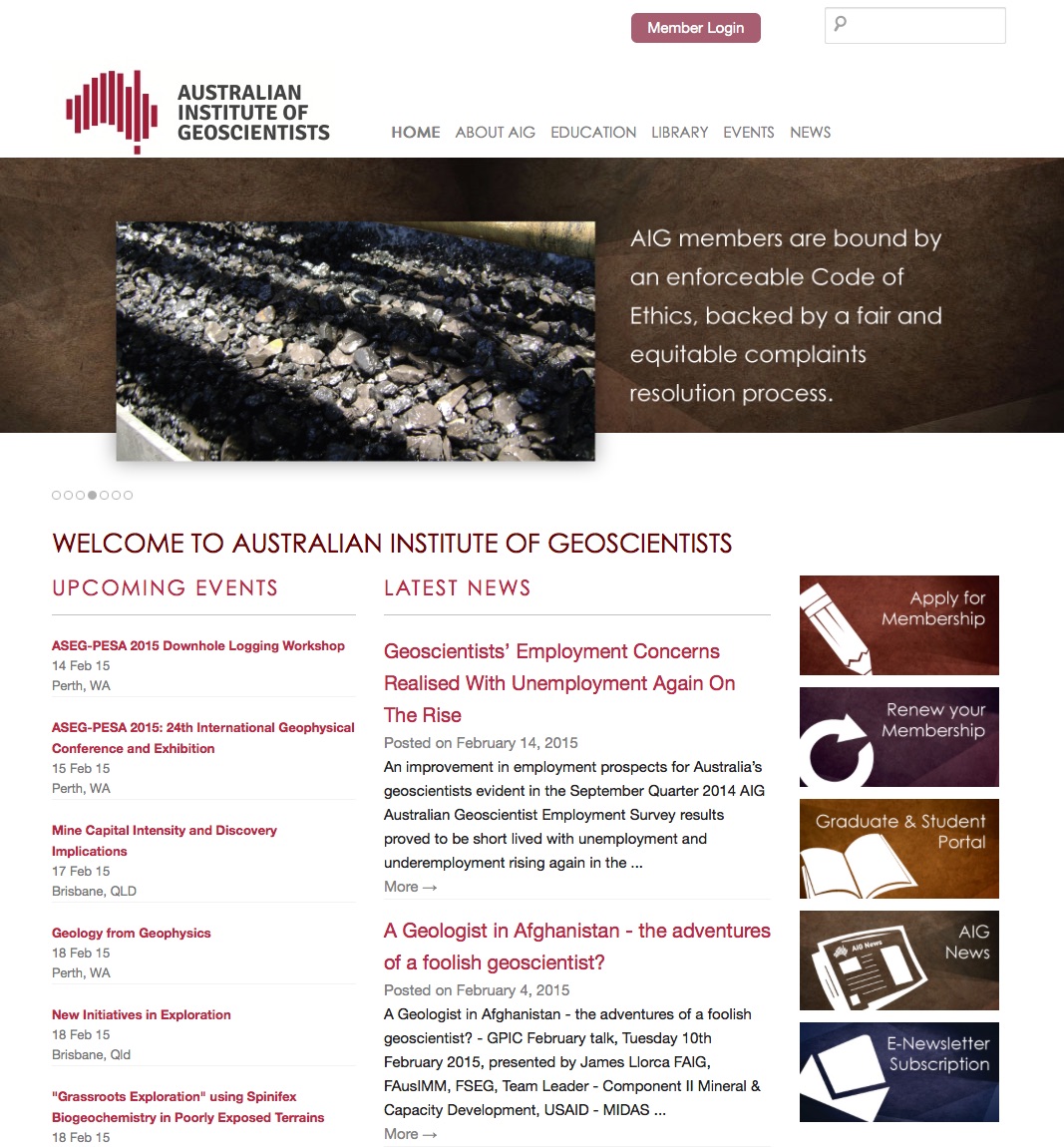 The membership portal enables you to keep your contact details up to date.  It will soon also provide members’ only access to AIG publications and the new-look AIG News which will be delivered electronically from the 2015 issue.  The membership portal will also carry employment advertisements and members are able to lodge classified advertisements for anything geological or geophysical that you’d like to find a new home for.  New additions to the portal will be promoted via the AIG web site and e-mail newsletters but it’s worth logging join from time to time.  The team maintaining the portal and web site are also always pleased to receive content and suggestions for improvements and new features.

AIG business emails (membership renewals, notices of annual and special general meetings etc. and other members’ only information) will always be sent to your email address registered in the membership portal.

AIG regularly distributes national and state branch email newsletters.  If you’d like to subscribe, or you need to update your newsletter content details, follow the e-newsletter subscription link from the AIG web site home page.   New subscribers simply need to complete the form.  You will receive an email with a link to confirm your identity and complete the registration process. 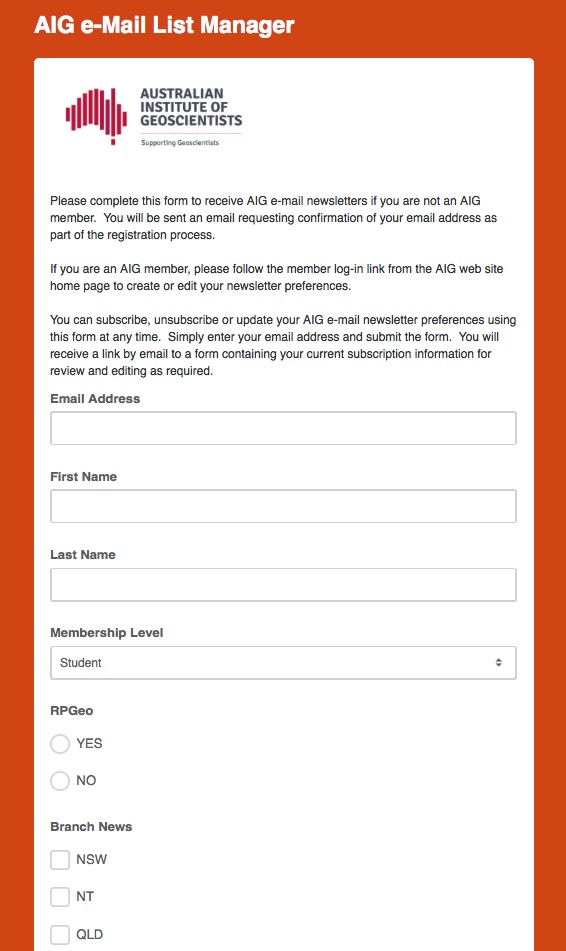 Geoscientists’ Employment Concerns Realised With Unemployment Again On The Rise

An improvement in employment prospects for Australia’s geoscientists evident in the September Quarter 2014 AIG Australian Geoscientist Employment Survey results proved to be short lived with unemployment and underemployment rising again in the December quarter.

Australia’s geoscientists continue to struggle in response to a sustained downturn in employment prospects. 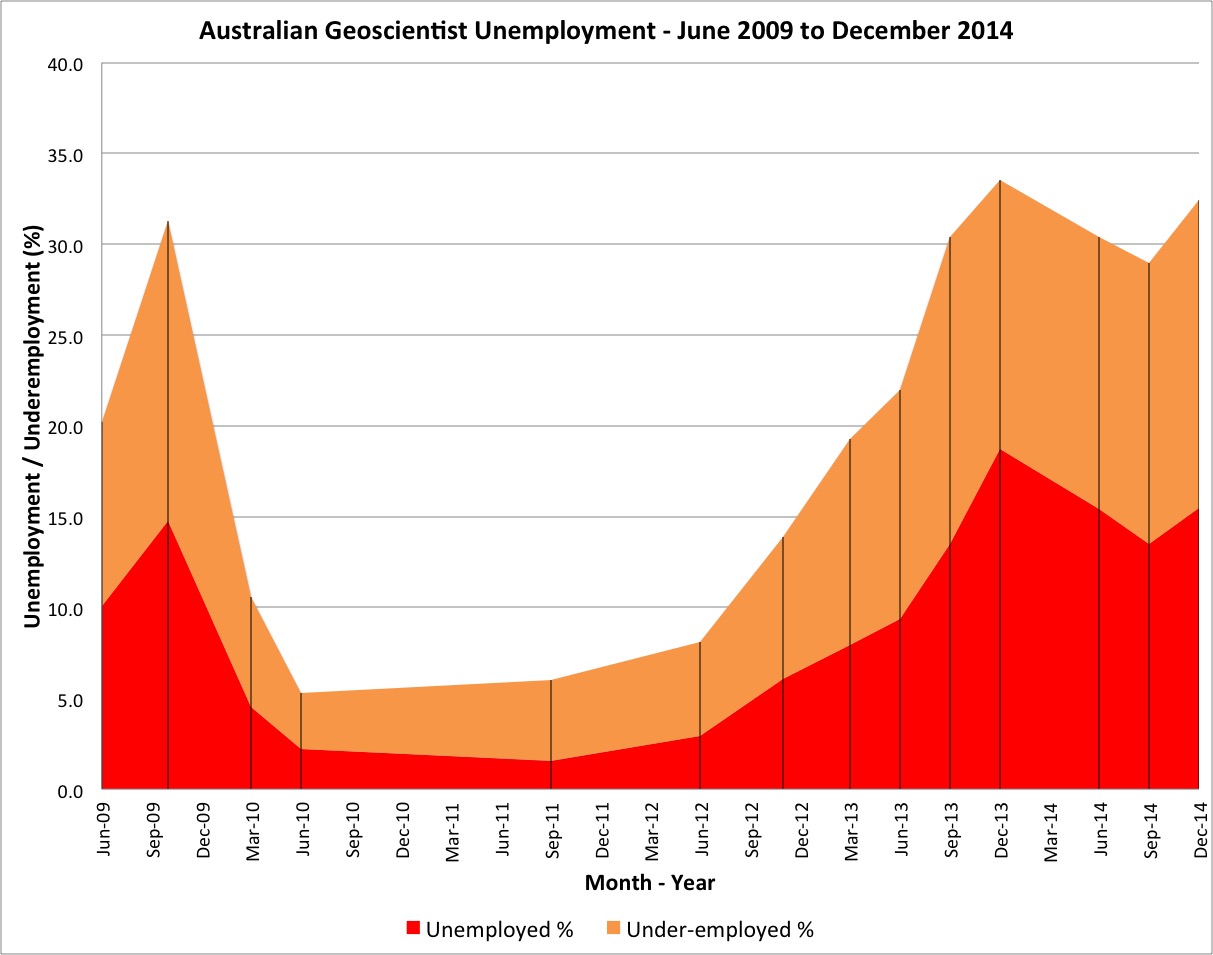 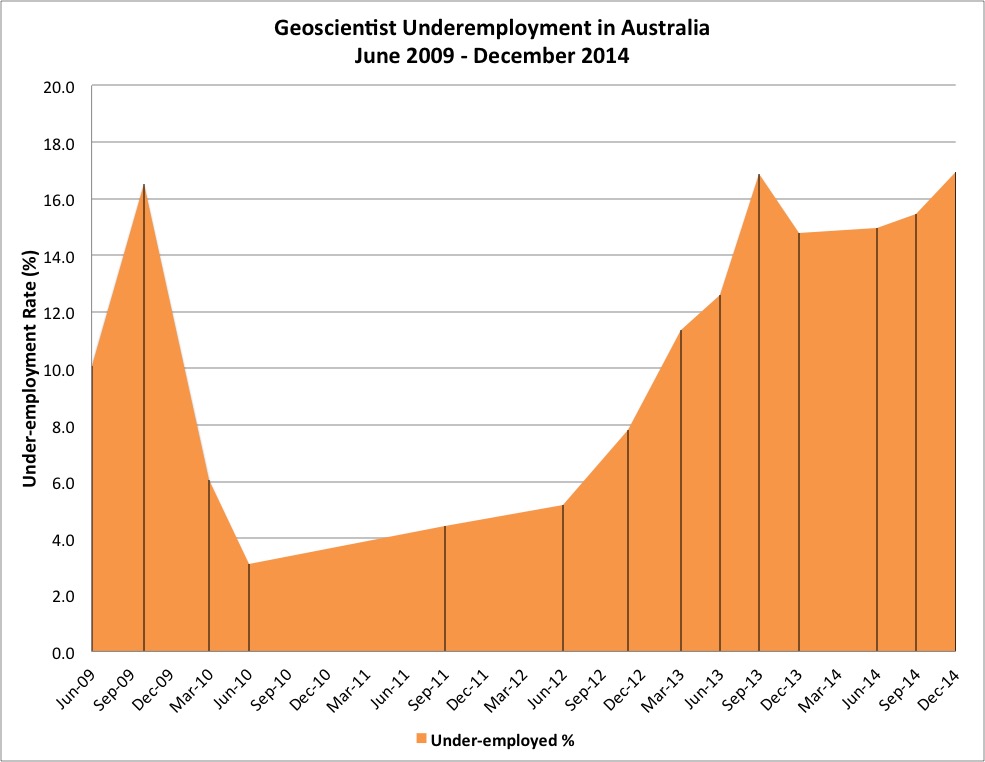 In the latest survey, 12.2% of unemployed geoscientists lost their jobs in the previous 3 months.  Almost 40% had been unemployed for more than a year.

More than 66% of unemployed and underemployed geoscientists were not confident of returning to full time employment in their chosen field within 12 months.  Six percent were seeking alternate employment outside their profession.

“The increase in unemployment amongst Australia’s geoscientists in the final quarter of 2014 will be seen as very disheartening by many in the profession” AIG President, Mr Wayne Spilsbury, said.  “The employment downturn, since it peaked at the end of 2013 has shown little sign of improvement”.  “The GFC in 2008 to 2009 was a short, sharp event”.

“The current, continuing downturn appears to be a product of depressed commodity prices contributing to a marked decrease in exploration that is essential to the sustainability of Australia’s minerals and energy resource industries and Australia’s prospects for continued economic prosperity” Mr Spilsbury said.

Western Australia recorded the highest unemployment rate amongst Australia’s “mining states” of 15.7 percent, a full two percent higher than for the previous quarter.

Some 83% of respondents were in or seeking full-time employment, while 4.2% were in or seeking part-time work and 13% were self-employed.  Some 65% of respondents worked or were seeking work in mineral exploration, 15% in metalliferous mining, 7% in coal and petroleum exploration and production, and 5% in engineering geology and groundwater resource exploration and management – levels very similar to those recorded by the previous survey.

“In AIG we believe that the unemployment and underemployment rates for geoscientists in Australia are a reflection of the overall health of Australia’s exploration and mining industries and a barometer for the overall outlook for resources”.  “The industry is clearly suffering from flat economic conditions and increasingly onerous constraints affecting both access to land for exploration and, surprisingly, the relinquishment of land considered to be unprospective by current exploration licence holders”.    “We continue to see Australian-listed, junior exploration and mining companies that are critically undercapitalised finding it difficult to attract new investment that lead to improved geological knowledge needed to both optimise the value of existing, known resources and to make new discoveries” Mr Spilsbury said.

“Promised initiatives to promote exploration by both the Federal and State governments appear to be having little impact on the state of the mining and energy production industries”.  “The storm for exploration and mining spoke of in response to the previous survey results three months ago shows no signs of abating”.

A Geologist in Afghanistan – the adventures of a foolish geoscientist?

A Geologist in Afghanistan – the adventures of a foolish geoscientist? 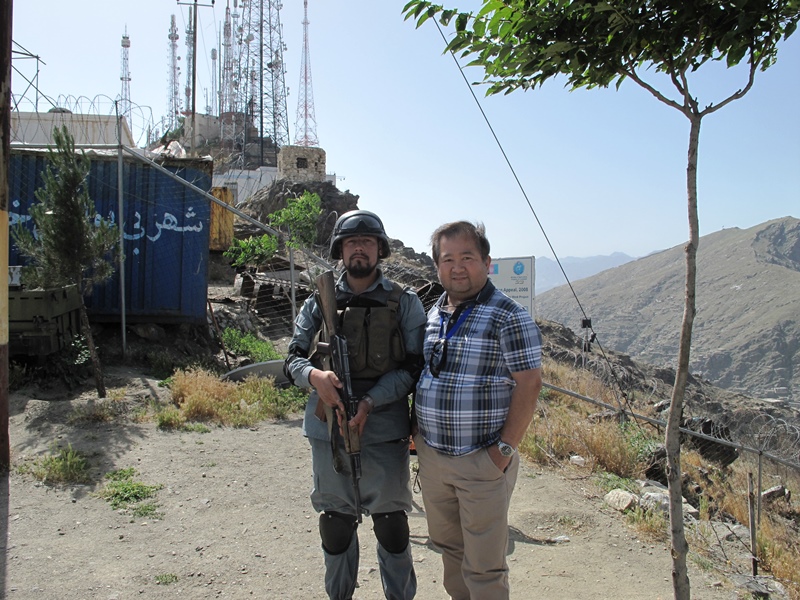 The talk is a presentation on the adventures of a possibly misguided geologist working in a war zone. It covers an overview of Afghanistan, its brief geology, prospectivity and the activities involved in conducting geological field work.

Also, it is understood that for the first time in GPIC history this talk will be delivered remotely. James’s talk will be something of an experiment: he will not be with us at the Basement on View. He will be giving his talk via Skype, from Kabul.

On the off-chance modern technology fails us on the night, bring an interesting rock – and we can discuss our disparate collection over our favourite drinkies.

James is a qualified geologist with more than 30 years practical experience in both technical and management roles in the exploration and mining industry in Australia, Indonesia, the Philippines, China, Zambia, Africa and most recently, Afghanistan. This experience has resulted in highly developed technical skills in mineral exploration, geological interpretation and resource modelling in addition to JORC competency level resource estimations across various commodities. James also has significant experience in resource due diligence, technical exploration and mining appraisals, JORC and NI 43-101 compliance reviews.

James’ expertise in geological field mapping, mine geology, 3D orebody modelling, geostatistical analysis and estimation of resources and reserves, valuation and project management of natural resources has led him to his current role with MIDAS (Mining Investment and Development for Afghan Sustainability) which is a USAID funded project. His current role as Team Leader for Component Ii of the MIDAS Project is involved in Mineral Exploration and Capacity Development of the Afghanistan Geological Survey and the Ministry of Mines and Petroleum.

The Bowen Basin and Beyond

The 7th Bowen Basin Symposium will be held at the Brisbane Convention & Exhibition Centre from 7 – 9 October 2015.

The Bowen Basin Symposium is held once every 5 years and has been a resounding success since its inception in 1985. The Symposium attracts up to 550 delegates and aims to foster the exchange of ideas for the solution of common problems and challenges; and to maintain an awareness of new technologies provided through formal presentations and Trade displays.

The theme of the 7th Bowen Basin Symposium is “Bowen Basin and Beyond”.  A web site has been established to provide information regarding the conference.  Visit www.bbsymposium.com.au 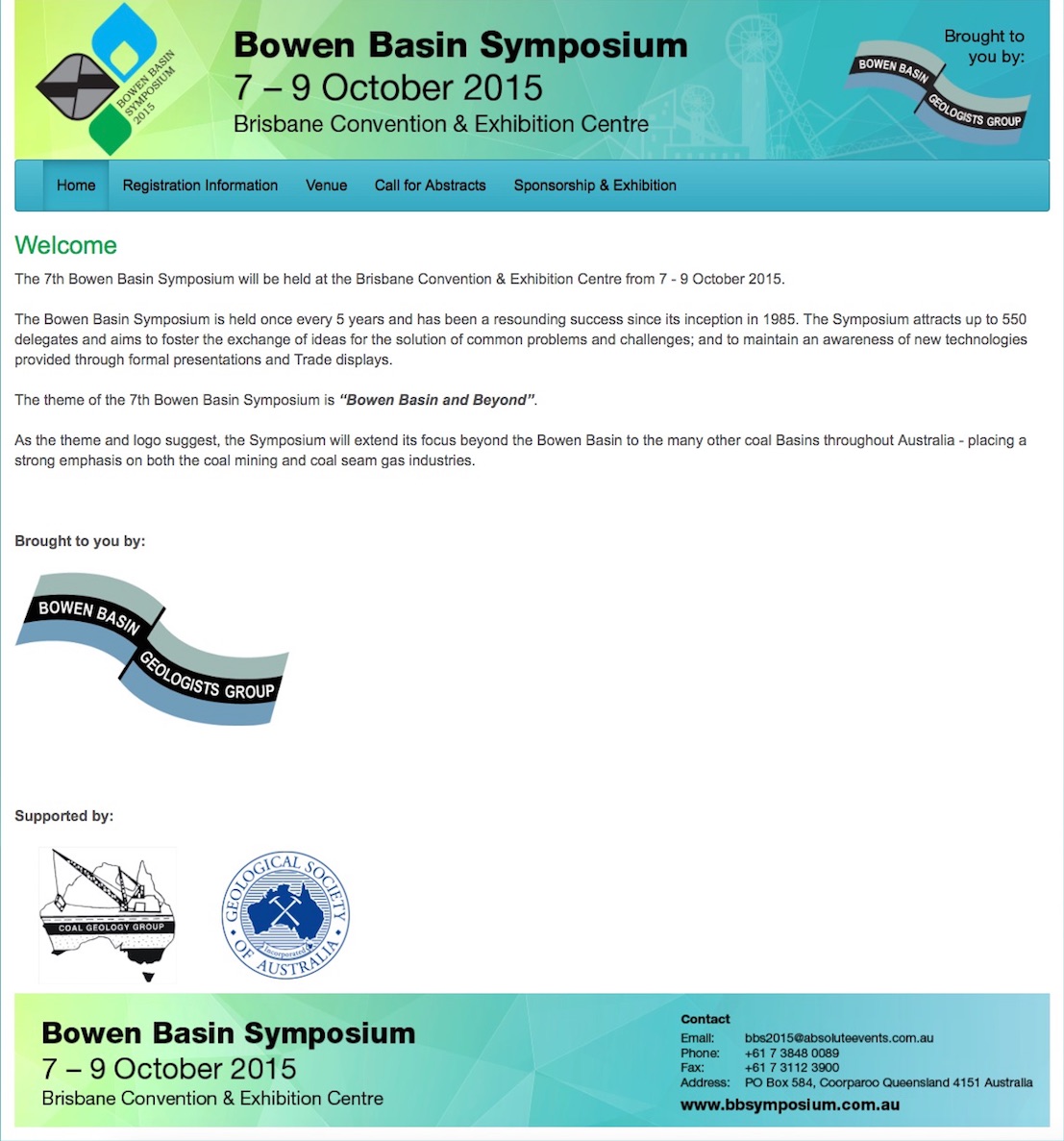