Australian Institute of Geoscientists > 2017 > May 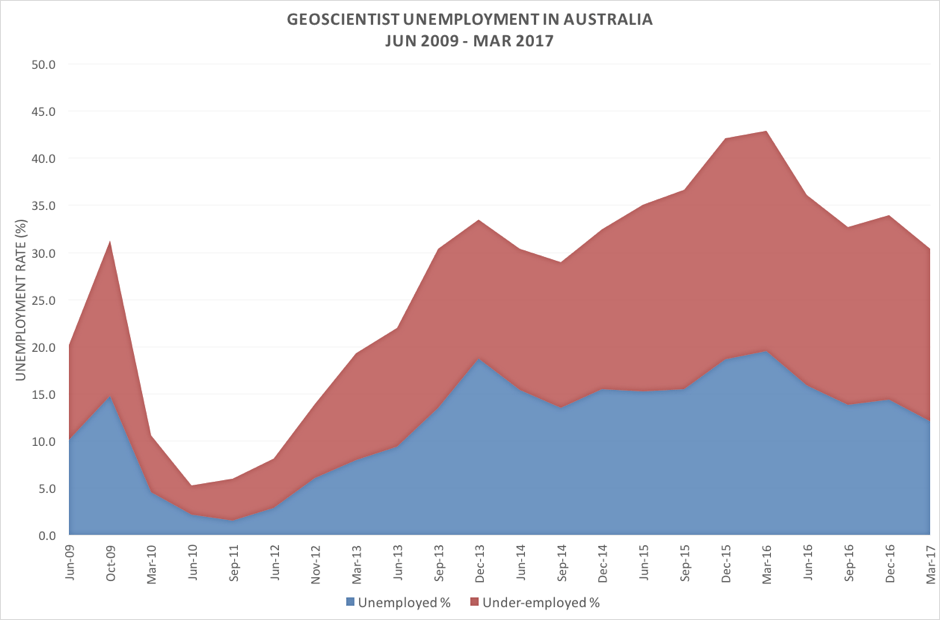 The proportion of geoscientists seeking to leave their profession to seek work fell from 11.4% in the final quarter of 2016 to 7.9% in the latest survey.

On a state by state basis, the unemployment rate ranged from 6.9% in New South Wales and the ACT to 14.8% in Queensland.  The underemployment rate was lowest in Victoria at 10.7% and highest in South Australia at 28.6%. 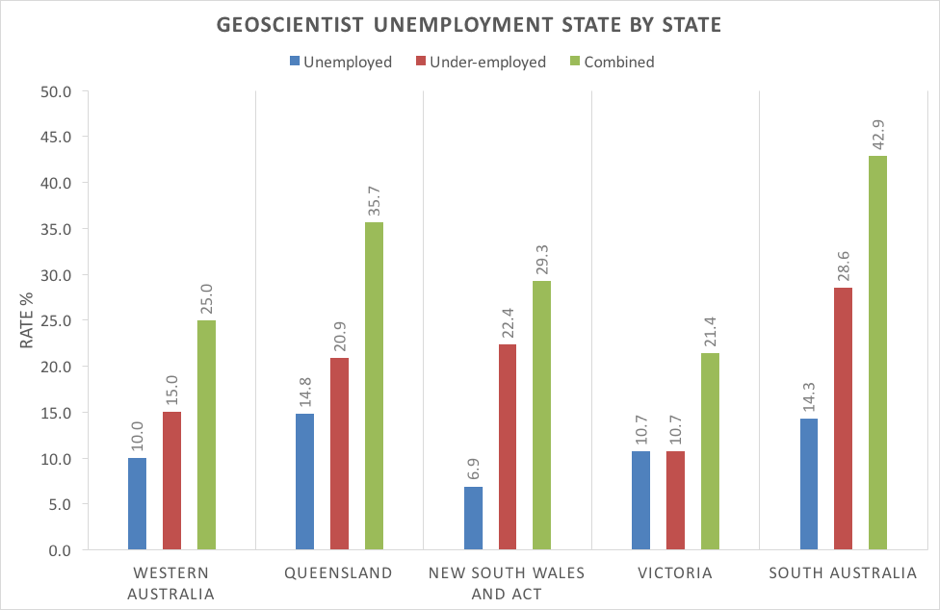 Geoscientist unemployment and underemployment on a state by state basis, Q1 2017 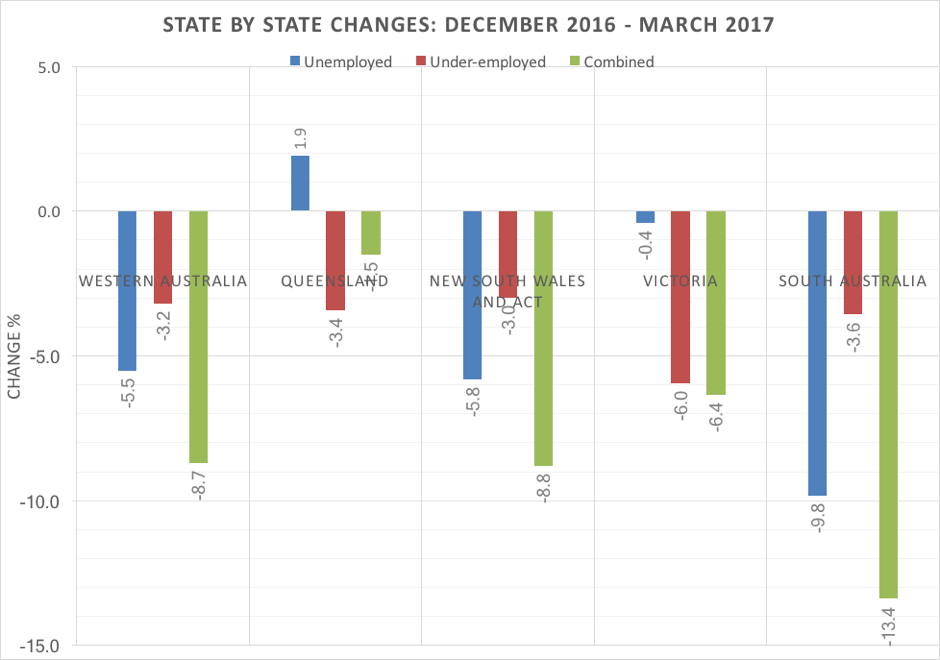 Geoscientist unemployment and underemployment on a state by state basis, Q1 2017.

Too few responses were received from geoscientists working in the Northern Territory and Tasmania to report state results.

Full-time, part-time and self-employment rates remained similar to those observed in the previous survey, at 77%, 5% and 18% respectively.  Some 59% of survey respondents work, or seek work in mineral exploration, 16% in metalliferous mining and 7% in energy resource (coal, oil and gas) exploration and production.

Long-term unemployment remains a real concern.  Almost 62% of unemployed and underemployed geoscientists reported that they had been out of work for 12 months or more.  16% of unemployed and underemployed geoscientists had lost their jobs during the quarter.  More than 53% were not confident of regaining employment in the next 12 months.

Just over half of the survey respondents currently in employment were confident of retaining their jobs for at least the next 12 months.

The survey attracted a total of 736 responses – more than one in ten geoscientists in Australia.

“After such a prolonged period of bad news on geoscientist employment in Australia, it’s good to have something clearly positive to report” spokesperson for the Institute, Mr Andrew Waltho said.  “The decline in unemployment and underemployment that we first saw some signs of in the latter part of 2016 appears to be continuing, reflecting a pick-up in exploration for minerals”.

“This good news, however, is no cause for complacency” Mr Waltho said.

“Geoscientist unemployment in Australia is still roughly three-times that of the Australian workforce in general, which is not good news for both the profession and the exploration and mining industry which accounts for the bulk of geoscientist jobs in Australia”.  “They work in an industry which drives a very large piece of Australia’s economy and provides both direct and indirect employment for tens of thousands of Australians” Mr Waltho said.  “Current levels of geoscientist employment are better than they were 12 months ago but are only back to mid-2013 levels” Mr Waltho said.

“Long term unemployment amongst Australian geoscientists is a real concern”.  A majority of unemployed and underemployed geoscientists are striving to secure new employment that still isn’t there, resulting in significant numbers of highly skilled and experienced professionals seeking work outside their chosen field” Mr Waltho said.

The improvement in this survey hopefully provides some encouragement for students who will be entering the geoscience profession over the next few years”.  “We are seeing some companies reinvigorate graduate recruitment and development programmes that have been a missing feature in the geoscience arena for a number of years which is also really encouraging” Mr Waltho said.  “We need more, both financial and intellectual, investment in Australia’s future to maximize the value of our mineral and human resources” Mr Waltho said.

The development of big issues and ideas for AGCC 2018

An outline of the technical program for our inaugural Australian Geoscience Council Convention (AGCC 2018) was published recently, when geoscientists were invited to engage directly with planning the program. The technical program will provide the opportunity for all geoscientists to communicate their work to a wide audience, and to hear about relevant developments presented by other geoscientists in multiple fields. Essentially, this broad program will provide the ‘bedrock’ of AGCC 2018 in a format familiar to regular attendees of the AESC, IGC and other large events. As is always the case, these sessions will be predominantly self-organising mini-symposia, strongly influenced by the actual papers that you submit as speakers, with guidance from our member organisations (eg, the International Association of Hydrogeologists) and overall direction by the Scientific and Technical Committee.

AGCC 2018 will provide opportunities to examine and consider some of the emerging issues that affect us all in geoscience. We anticipate these will be topics that attract attention from industry, government and academia, while also creating opportunities for non-geoscientists to engage and participate in our deliberations in Adelaide. This interaction will be a significant differentiator of this convention and will help us achieve our vision to ‘raise the profile of geoscience to be pre-eminent in Australia’. We also hope to expose delegates to ideas they would not normally engage with in routine technical talks, and to attract those people who don’t normally attend our various member organisation conferences.

To do this, we plan to have several focused discussions that raise the Big Issues, explore the Big Ideas (hopefully some including new approaches and directions for some of the Big Issues!) and reach consensus about providing commitment and support for ways to take geoscience forward. We are aware of the value of strategic planning and believe that exciting times are ahead for geoscience. Some of these have become apparent to many of us during the current formulation of a new Decadal Plan for Earth Science, sponsored by the Australian Academy of Science.

An example of one topic we favour will be built around the early commitment to attend by Iain Stewart, Director of the Sustainable Earth Institute in Plymouth, UK. Iain is a riveting speaker who is passionate about geoscience communication and education. We will hold a plenary session on this topic with additional key thinkers, an interactive question and answer session, the opportunity during the day to formulate an agreed convention position and a summing up statement (press release) that will be issued. We look forward to your thoughts on the merits of this approach and your likely level of commitment and engagement.

What are the big issues and ideas in geoscience?

We are seeking ideas about the Big Issues (and Big Ideas) that you want to explore, and about possible champions of these that will attract widespread community interest, support from major sponsors and the attention of policy makers.

At this stage, we have a think-tank subcommittee that has formulated the following possible topics from a much larger field of possible candidates:

Other possibilities could be the ever-increasing role of automation (robotics), improved drilling technologies, innovative geological models and the search for novel or unusual commodities, although these might be addressed comprehensively in the broad technical program. We are seeking your input on:

To reiterate, the broad technical basis of AGCC 2018 will allow us all to present papers on our specific technical interests (subject to acceptance by the Scientific and Technical Committee), which are of course very wide ranging and inclusive. There will no doubt also be embedded mini-symposia sessions covering the collective interests of many diverse groups and of our member organisations (eg, UNCOVER, JORC, Valmin).

We are now seeking your thoughts on the BIG ISSUES and BIG IDEAS component of AGCC 2018. To let us know your views, please get in touch with any member of the Organising Committee at our website: https://www.agcc.org.au/committee.

On behalf of the AGCC 2018 Organising Committee

In 2017 the AIG is again offering bursaries to Honours, Postgraduate and Third Year geoscience students.

The 2017 Bursary awards, which have values between A$1000 and A$4000, are funded by the AIG, by the generous donations of organisations and AIG members to the AIG Geoscience Education Foundation.

The 2017 Travel Grants have a value of A$1000 and are funded by the volunteer efforts of the Victorian State Branch Committee.