The course will present:

The workshop will be of interest to graduate students and exploration geologists who want an update on this deposit class and exposure to some of the detailed work that has been done on these deposits globally.

AIG is a cosponsor of a five day exploration skills course for graduate geoscientists being held by AusIMM in conjunction with Digirock in Kalgoorlie, Western Australia, 19-23 January 2015.

The course is timed to be delivered early in a graduate’s career – near the start of initial employment. It is intended as a primer for the technical issues of exploration that young professionals are likely to encounter as well as information on the business aspects of exploration and expected work ethic.

The course brochure, including programme and registration details, is available here.

While some schools are winding down in their last week of the year, Nanango SHS students will dedicate this time to learning more about possible career pathways into the resource sector as part of the Queensland Minerals and Energy Academy’s (QMEA) Career Café program, managed by the Queensland Resources Council and being hosted at the school tomorrow (Wednesday, 9 Dec).

The QMEA works with students between years 7 and 12 to assist young people in developing a talent pipeline in to the minerals and energy sector. The Career Cafes bring education and industry together to show students the real world application of their classroom learning.

More than 200 hundred years 8 and 9 students will hear from industry representatives from Downer EDI and Stanwell’s Tarong Power Station.

Dave Waddell, Operations Manager and SSE of Downer EDI Mining’s Meandu Mine will join Rob Woodall, Production Maintenance Manager, Generation Operations, Stanwell -Tarong Power Station to discuss their own stories from school to the world of mining and energy production.

‘Not everyone’s career and study pathway is the same, and with year 12 students recently graduating, now is a good time for younger students to start thinking about careers that might appeal to them,’ Ms Grady said.

With most students having a connection to either Meandu or Tarong Power Station, the Career Café will allow students to gain a clearer picture of the opportunities that exist with the two companies and how they can be on the payroll in four or five years’ time.

‘As they are such large employers in the region, I’m sure there will be lots of discussions and valuable information being shared,’ Mr McDonnell said.

The QMEA is a ‘virtual’ academy of 34 state and private school across Queensland, which aims to bring young people into long-term and rewarding careers in the resources sector. It is a partnership between the Queensland Government, the Queensland Resources Council and the education and training sector.

The New Zealand Government has moved to make reporting of exploration results, mineral resources and ore reserves in compliance with the JORC Code for all entities holding a Tier 1 Minerals Permit from 2014.  The first reports subject to this requirement must be lodged with New Zealand Petroleum and Minerals by 31 March 2015.

Tier 1 permits are issued for complex, higher risk and return petroleum and mineral operations and are subject to a more proactive management and regulatory regime than Tier 2 permits, which apply to lower-return industrial, small business, and hobby mineral operations.  All permits are judged to be either Tier 1 or Tier 2 permits.  The distinction applies to all forms of mineral title, including prospecting, exploration and mining permits.

All prospecting and exploration permit holders are required to provide and annnual summary report on prospecting or exploration activities under the permit for the previous calendar year and a report on expenditure on prospecting and exploration.  The information in this form is required under regulations 35 and 37 of the New Zealand Crown Minerals (Minerals Other than Petroleum) Regulations 2007.  For Tier 1 permits, permit holders must also submit a report on their engagement with iwi and hap? whose rohe includes some or all of the permit area or who are directly affected by the permit.

For mining permits and licences, the report includes a report on a summary of prospecting and exploration activities as outlined above, unless it is for an underground mine and the annual royalty payable by the permit holder for the minerals obtained under the permit is less than or equal to $50,000.

These changes mean that government entitles, including Solid Energy and private companies, in addition to NZX listed companies who have been required to meet the requirements of the JORC code for public reports of exploration results, mineral resources adore reserves for many years, will be required to appoint Competent Persons and lodge reports which meet the requirements of the JORC Code (2012) for the first time next March.  Permit holders will also be able to lodge annual reports and applications for renewals electronically from the second quarter of 2015.

Members: please be advised that the AIG Secretariat office, provided by the Centre for Association Management (CASM) in Perth, will be closed from Midday, 17th December 2014 until 19th January 2015.

The office email addresses will be monitored during this period.

Members are encouraged to contact an AIG Council member with any issues over the holiday period.  The telephone and email contact details for AIG Councillors appear in each issue of AIG News.

Best wishes for Christmas and a safe and prosperous 2015. 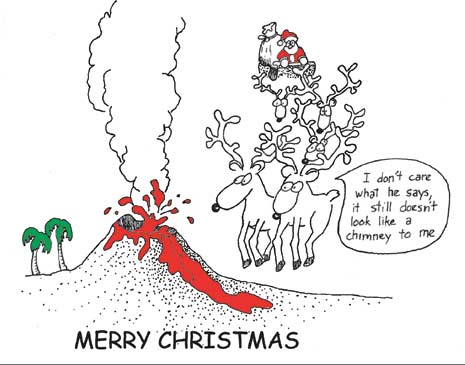 This drawing  by Dr. Ken Hon, currently a professor of geology with University of Hawai`i at Hilo captures the season.  http://hvo.wr.usgs.gov/volcanowatch/archive/2005/05_12_22.html

Brisbane-based AIG member Adrian Day is assembling a collection of Economic Geology back issues, along with a collection of geology textbooks, for a university in Cambodia.

Can you help with the missing issues?  Click here to contact Adrian if you are able to assist.

A two-day meeting on mineral resources provided an opportunity for representatives of the European Parliament and Commission, international finance and national government organisations, and of private industry to exchange views on a wide range of issues directly impacting on the future economic development of Europe.

The meeting, organised by the European Federation of Geologists (EFG) and the Pan-European Reserves and Resources Reporting Committee (PERC) on 20 and 21 November 2014 at Brussels, heard that Europe is increasingly dependent on imports of the raw materials required to sustain current, and develop new technological, industrial production. Demand from new, emerging economies, including China, is putting these supplies at ever increasing risk. This is an issue of significant importance as over 30,000,000 jobs in Europe are directly dependent on access to raw materials.

The European Commission has developed a series of initiatives to address the problem. In particular, the Raw Materials Initiative seeks to ensure access to international markets for European industry, sustainable production from European resources, and recycling efficiency. 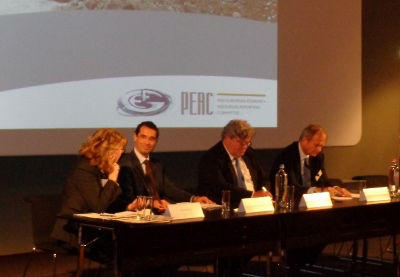 The overall EU policy objective was clearly outlined by Reinhard Bütikofer, MEP, and current member of the Committee on Industry, Reasearch and Energy (ITRE) of the Parliament. He stressed that future growth in Europe must be inclusive, sustainable and transparent.

There was general agreement that, if these objectives are to be achieved then, actions must be taken at European, national and industry level. At European level consistent, and interlinked, policy initiatives are required. National governments need to implement clear and transparent regulations. Industry, if it is to obtain a social licence to operate, must communicate clearly with all stakeholders and conduct their activities to the highest standards.

It was also recognised that, if policy makers are to plan the best environment for investment, and provide proper guidance, then they must have access to quality statistics and reports. This requires consistent minerals reporting across the commodity life cycle from discovery through development, and production, to end of life recycling.

It was agreed that open dialogue between the major stakeholders in finance, regulatory and industry sectors is essential. That dialogue can only be successful if all participants understand and agree the common principles.

It was recommended that this objective is best served by the adoption of the standards of transparency, materiality, competency and impartiality embodied in the Pan-European Code for the Reporting of Mineral Exploration Results, Mineral Resources and Reserves.

About EFG: The European Federation of Geologists is a non-governmental organisation that was established in 1981 and includes today 24 national association members. EFG is a professional organisation whose main aims are to contribute to a safer and more sustainable use of the natural environment, to protect and inform the public and to promote a more responsible exploitation of natural resources. EFG’s members are National Associations whose principal objectives are based in similar aims. The guidelines to achieve these aims are the promotion of excellence in the application of geology and the creation of public awareness of the importance of geoscience for the society. www.eurogeologists.eu

About PERC: PERC is the organisation responsible for setting standards for public reporting of exploration results, mineral resources, and mineral reserves by companies listed on markets in Europe. It is a member of CRIRSCO, the Committee For Mineral Reserves International Reporting Standards, and the PERC Reporting Standard is fully aligned with the CRIRSCO Reporting Template. www.PERCstandard.eu

The rapid proliferation of 3-D printing technology that began in the early 2000s sent ripples of excitement through the tech world and beyond; some pundits predicted 3-D printing would transform everything about modern life. Until a few years ago, however, the high price of printers put them out of reach for most academic researchers and hobbyists.

Earth Magazine describes how, more affordable printers like the MakerBot — which costs about $2,000, have broken this barrier, and geoscientists have started testing the waters.

Read the full article at: http://www.earthmagazine.org

At its Annual meeting in Ulaanbaatar in Mongolia during October 2014, CRIRSCO (the International Committee for Mineral Reserves International Reporting Standards) welcomed Mongolia as its eighth member and first member in Asia.

Mongolia has established the Mongolian Professional Institute for Geosciences and Mining (MPIGM) as its National Reporting Organisation (NRO). Its President is Mr Damba D. It operates under a By-Law approved by the Minister of Mining and has various grades of Membership. There is also provision for Registered Professionals, who meet certain qualification and experience guidelines.

The Mongolian Resources and Reserves Committee (MRC) is a committee of MPIGM and it has developed the MRC Code for the reporting of Exploration Results, Mineral Resources and Mineral Reserves, which is compatible with the CRIRSCO Template.

CRIRSCO is pleased to welcome Mongolia as a member of CRIRSCO. Its representatives on the CRIRSCO Committee are Mr Batardene D and Ms Oyungerel B.

This will enable MPIGM to apply to the other NROs for recognition as a Recognised Professional Organisation.